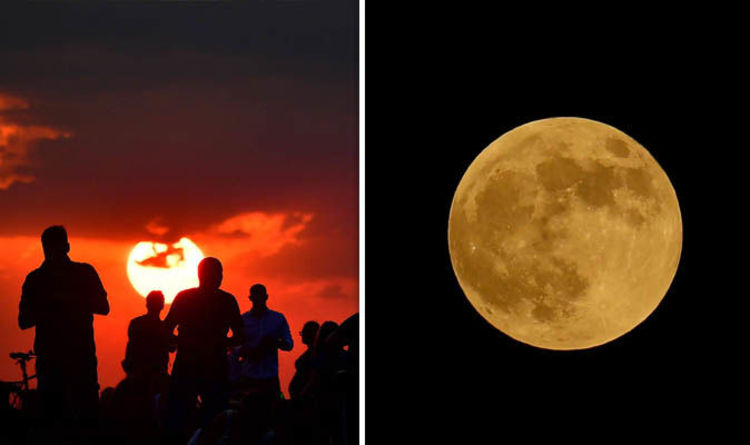 
The Moon will turn red in a few hours tonight, as it will enter the Earth’s darkest shadow during the lunar eclipse.

Britain will be among the countries able to witness the stunning phenomenon.

Skygazers who want to enjoy every minute of what is expected to be the longest lunar eclipse recorded in the 21st century can do a few things to enjoy the spectacle.

As Earth will block the sunlight when interposing itself between the Moon and the Sun, it will be perfectly safe to look at the eclipse with the naked eye.

This is not the case during solar eclipses, when the Sun is hidden by the Moon but can still cast its sunlights directly towards planet Earth.

The advise of US space agency NASA’s experts during a solar eclipse is to “avoid all unnecessary risks” and keep your eyes safe by looking at the phenomenon only using proper lenses.

And where you plan to watch the Blood Moon is important.

Chris Tinney, professor in the physics department at the University of New South Wales, explained there are some places where it is possible to have a clearer view of the Blood Moon.

He said: “The best place to see it is out in the country away from lights.

“If you’re living in [a city] then there’s a lot of light pollution from the night sky, so the contrast between the moon and the sky won’t be as great.”

And despite tonight’s lunar eclipse bring set to last for one hour and 43 minutes, experts believe there is a specific time when everyone in the UK should look up to see the Blood Moon at its best, which is 9.21pm.

Those living in the southern part of the country will start seeing the Blood Moon from 8.49pm.

The phenomenon is expected to last until 10.13pm.

To make sure you won’t miss it, you can check Timeanddate.com, which is running an eclipse tracker allowing you to find the best time to see the eclipse based on your location.

And those who live in areas that will miss out on the Blood Moon, will still be able to watch it in the comfort of their houses, as the Royal Observatory at Greenwich plans to stream live pictures of the event.

A Rare Condition Makes Hair Truly Untamable, All Thanks to These Genes : ScienceAlert
It Turns Out There Is Such a Thing as Good Gossip, According to New Research : ScienceAlert
Experts Estimate The Scale of The Nord Stream Pipelines Methane Leak : ScienceAlert
Narwhals Are So Weird, Scientists Used Chaos Theory to Explain Their Behavior : ScienceAlert
Ancient Burial of a Young Girl Shows How We Carried Our Babies 10,000 Years Ago : ScienceAlert