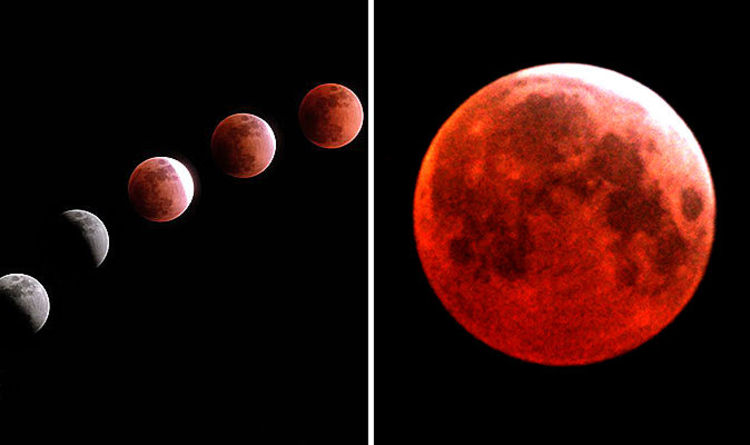 
The total lunar eclipse will last for a whopping one hour and 43 minutes starting at 20:21pm this evening.

The Moon will turn an eerie shade of red as it passes between the Earth and the sun blocking out sunlight.

Dr Helen Klus from the Royal Astronomical Society told BBC’s Today programme Mars Jupiter and Saturn will all be visible shortly after the rare ‘Blood Moon’.

The BBC host said he believed Mars and Jupiter would also be “on show tonight” shortly after the historical eclipse.

“It’s going to look a lot brighter and a lot redder. Mars is going to rise just under the Moon about half-an-hour later – so definitely keep an eye out for that.

Stargazers hoping to catch a glimpse of the longest total lunar eclipse of the 21st Century should get a view from Europe, Asia, Africa, Australia and New Zealand.

“As it rises, you’ll see it more and more clearly and then the eclipse finishes at about a quarter past 10pm.

“It’s just lit by the light that’s filtered through the Earth’s atmosphere which is why it looks this sort of dusty red.”

The next total lunar eclipse will take place on January 21 2019.

‘Unbelievable’ Video Shows 2 Bees Working Together to Open a Soda Bottle : ScienceAlert
NASA Is Sending a Rotorcraft to Titan in 2027. Here’s Where It Will Land. : ScienceAlert
It Turns Out There Is Such a Thing as Good Gossip, According to New Research : ScienceAlert
Astronomers Think They Know The Reason For Uranus’s Kooky Off-Kilter Axis : ScienceAlert
3 Major Aquatic Animal Groups Can Trace Their Lineage to This Ancient Armored ‘Worm’ : ScienceAlert