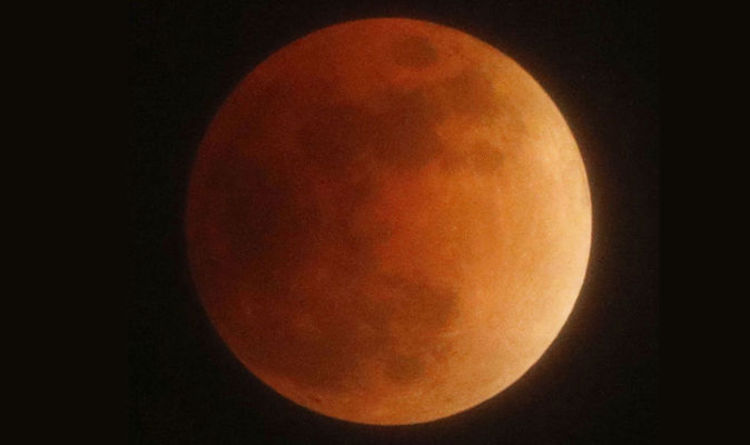 
The lunar eclipse, known as the Blood Moon, will last between 84 to 103 minutes depending upon the location from where it is watched, with the partial eclipse being visible for almost four hours.

Mathematically, a lunar eclipse cannot last more than 1 hour and 47 minutes and tonight’s will be the longest of the 21st century.

People in the UK, Europe, Asia, Africa and parts of South America and Australia will be able to see the Blood Moon.

But stargazers in the US will not be able to watch the spectacle, as the moon will be hidden below the horizon throughout the whole event.

Those planning to watch the event should do so from an open space that has minimal light pollution.

It is safe to look directly at the lunar eclipse without protective eyewear or sunglasses and no specialist equipment is needed to view either the Blood Moon or Mars this evening.

Nasa scientist, Amy Simon, said: “It’s giving people a chance to go out and look up and remind themselves that there are other things out there that people often forget about as they run from house to car.”

An eclipse is when a planet or the Moon passes between another planet, Moon or the Sun.

At least two lunar eclipses happen every year and tonight’s will be the 85th of this century.

Some have predicted that the event could signal the end of the world with American Pastor Paul Begley claiming: “It is a sign of the end times. We are in the era of the apocalypse and this blood moon, which will be the longest blood moon of this century, is happening in the 70th year of Israel being a nation.

“It is happening the same year also that Jerusalem has been declared the eternal city of God and it is happening with the volcanoes already erupting in Hawaii and the smoke, the ash, all of the plumes and the volcanic rivers flowing.”

Mars will also be visible to the naked eye and will appear much larger and brighter than normal, as the planet will be the closest it has been to the Earth for 15 years.

Bitcoin’s Climate Impact Is Bigger Than Beef Farming – And It’s Only Getting Worse : ScienceAlert
Deep Brain Simulation Could Alleviate OCD When Other Treatments Have Failed : ScienceAlert
Control of a 6-Qubit Processor in Silicon : ScienceAlert
New Discovery Means Parkinson’s Could Be Diagnosed With a Swab in Just 3 Minutes : ScienceAlert
Shimmering ‘Lakes’ Under The South Pole of Mars Might Be Something Else Entirely : ScienceAlert