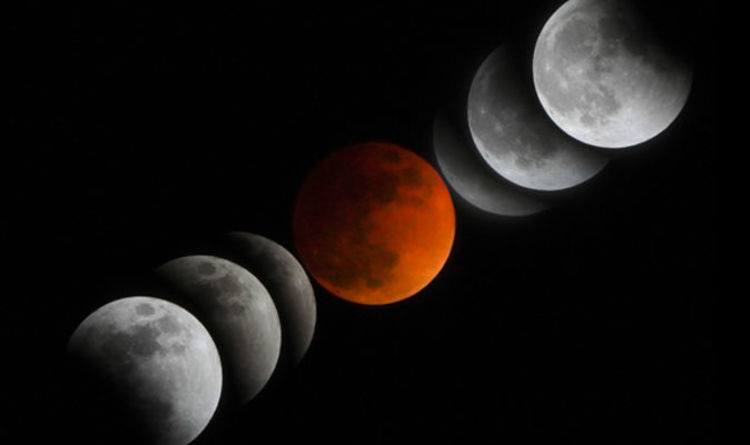 
In the Book of Revelation, the seven seals refer to symbolic seals of a book that once opened will unleash the apocalypse.

As they open, some Christians claim more natural disasters and wars will break out across the world.

The theory is based on the Bible passage Revelation 5:1-5, which reads: “And I saw in the right hand of him that sat on the throne a book written within and on the backside, sealed with seven seals.

“And I saw a strong angel proclaiming with a loud voice, Who is worthy to open the book, and to loose the seals thereof?

“And no man in heaven, nor in earth, neither under the earth, was able to open the book, neither to look thereon.”

According to Christian website Find Shepherd, the Blood Moon could represent one of the seals.

The website reads: “From these verses we can know that only God Himself can loose the seven seals and open the book.

“Nowadays, the blood moon frequently appears. Is it a sign that the Lord Jesus has returned and loosed the seals and opened the book?

“The appearance of the blood moon is the beginning of the great disaster. Nowadays, disasters are frequently occurring around the world, such as wars, earthquakes, droughts, floods, viruses, and so on.

“The prophecies in the Book of Revelation have already been fulfilled; Jehovah’s great and terrible day will soon arrive and the great disaster is drawing near.”

However, scientists have given a more simple explanation for the blood moon.

The blood moon is technically an eclipse, and the Moon takes on a red tinge when it passes through the shadow cast by Earth.

Narwhals Are So Weird, Scientists Used Chaos Theory to Explain Their Behavior : ScienceAlert
Experts Estimate The Scale of The Nord Stream Pipelines Methane Leak : ScienceAlert
These Are The Most Distant Star Clusters Ever Seen, And We Nearly Missed Them : ScienceAlert
Secret Clues in Tutankhamun’s Tomb Reignite The Idea That Nefertiti Is Hidden Nearby : ScienceAlert
A Rare Condition Makes Hair Truly Untamable, All Thanks to These Genes : ScienceAlert