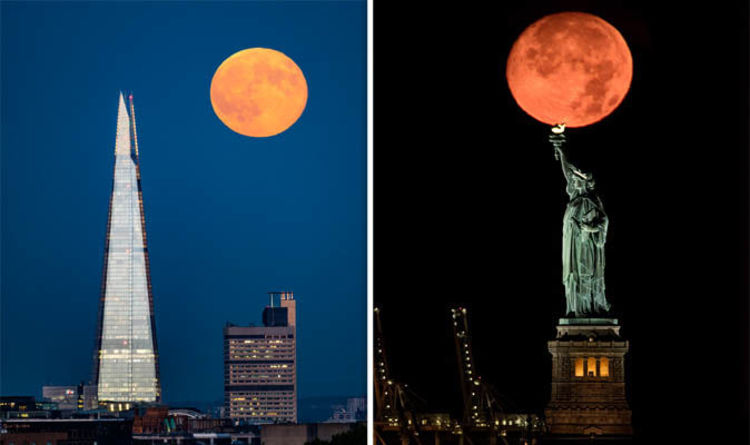 
The moon will pass through the centre of Earth’s shadow on Friday, July 27, in the afternoon hours.

For a brief moment, the moon will appear to darken and disappear from sight before it emerges with an ominous red glow.

The total lunar eclipse, the longest eclipse of the century, will last a whopping one hour and 43 minutes during totality.

From start to finish, additional partial and penumbral eclipsing will bring the spectacle to around three hours and 55 minutes.

The Blood Moon will be visible to stargazers in Central Asia and Eastern Africa with lesser visibility in Europe, Western Africa, South America and parts of Southeast Asia.

How to see the Blood Moon in the UK this Friday?

Despite the British Isles sitting outside of the Blood Moon’s optimal path of totality, the eclipse will still be visible across the entire country.

But the bad news is the eclipse will only be visible from moonrise, which depending on your location, will star after 8.30pm BST or later.

By this point in the show, the total lunar eclipse will have already begun and the moon will appear redder at moonrise.

In London, the moon will peak its glowing face over the horizon around 8.50pm BST but stargazers to the northeast in Cardiff, for example, will have to wait until around 9.01pm BST.

Further up north the moonrise timing is even more unfortunate with the moon not expected to show above the horizon until around 9.30pm BST.

Click here to read more about when and where the Blood Moon eclipse will be visible across the UK.

Regardless of the timings the moon will appear this Friday low in the southeast skies before moving south by midnight.

For the best chance of catching a glimpse of the moon, the Royal Astronomical Society advises you stay on the lookout for wide-open viewing areas with an unobstructed view of the horizon.

How to see the Blood Moon in the USA this Friday?

The United States, Canada, Mexico and the rest of Central America will be on the dayside of Earth when the eclipse occurs.

This means the moon will completely pass through and leave the Earth’s shadow by the time night strikes.

But there is still a chance for astronomers to catch a glimpse of the Blood Moon if they tune in to one of several Blood Moon lunar eclipse live streams online.

Here in the UK, Royal Observatory Greenwich will broadcast live the lunar eclipse with commentary from its astronomers, through a Facebook LIVE event.

Alternatively, astronomy and calendar guide website Time and Date will host its own Blood Moon eclipse live stream on YouTube.

Shimmering ‘Lakes’ Under The South Pole of Mars Might Be Something Else Entirely : ScienceAlert
Hubble And Webb Pics Reveal DART Impact Was Even Bigger Than Expected : ScienceAlert
Amazing New Fossils Provide Earliest Known Traces of The Evolution of Our Jaws And Limbs : ScienceAlert
Behold, The Epic Last Images Taken by NASA’s Asteroid Redirection Test Spacecraft : ScienceAlert
Experts Estimate The Scale of The Nord Stream Pipelines Methane Leak : ScienceAlert