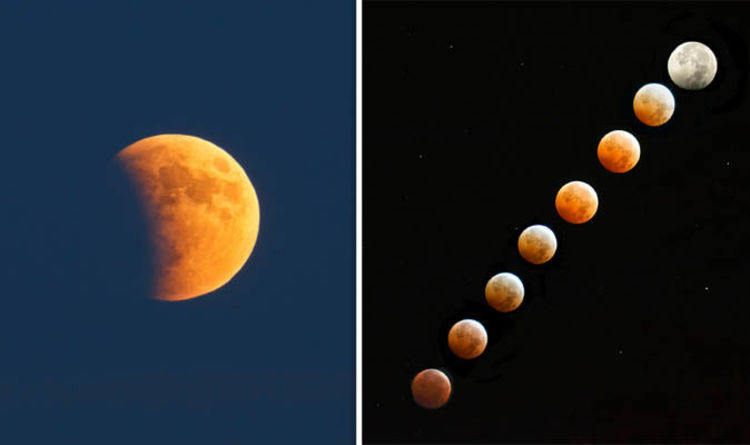 
The July moon is slowly nearing its bright full moon phase when the entire face of the moon is lit up by the sun.

But on the night of Friday, July 27, something peculiar will happen and the moon will instead turn a deep red colour.

Next week is the total lunar eclipse when the moon passes through the centre of Earth’s shadow, known as the umbra.

“The moon is going to look redder than normal so you will see what you call a Blood Moon because the light has come through the atmosphere.

“This is called Rayleigh Scattering and is the same effect which makes sunsets look redder as well.”

The space expert said the term Blood Moon is not widely used by astronomers but is more of a colloquial phrase passed around in popular astronomy.

Total lunar eclipses happen whenever the Earth positions itself directly in-between the sun and the moon.

But due to the moon’s slightly titled orbit around the planet, total eclipses only happen about once or twice a year.

Dr Klus explained: “It’s a lunar eclipse which means the Earth is going to be between the sun and the moon and the light from the sun is going to cause a shadow.

“The moon then goes into the shadow and that’s what causes the moon to go black during the eclipse.

“It doesn’t happen every month. You could imagine it might but it doesn’t because the moon’s orbit is slightly inclined, which is why it is quite rare.”

The moment of total eclipse happens when the moon dips into the centre of the Earth’s darkest shadow.

What is the Buck Moon?

The so-called Full Buck Moon is an old Native American name given to the July moon because a buck’s antlers are in full growth around this time.

The Algonquin tribes of Native Americans would give each face of the full moon a unique name to mark the passage of time and seasonal variances in the landscape.

The June full moon, for instance, is known as the Strawberry Moon because berries are ripening in the wild towards the end of that month.

Other tribes such as the Cherokee named the July full moon the Ripe Corn Moon and the Zuni dubbed it the Moon When Limbs of Trees Are Broken by Fruit.

Ancient Burial of a Young Girl Shows How We Carried Our Babies 10,000 Years Ago : ScienceAlert
‘Dark Data’ Is Leaving a Huge Carbon Footprint, And We Have to Do Something About It : ScienceAlert
Deep Brain Simulation Could Alleviate OCD When Other Treatments Have Failed : ScienceAlert
Long COVID Is Still Raising More Questions Than Answers, Say Researchers : ScienceAlert
Weight Lifting in Old Age Does More Than Just Keep Your Muscles Strong : ScienceAlert