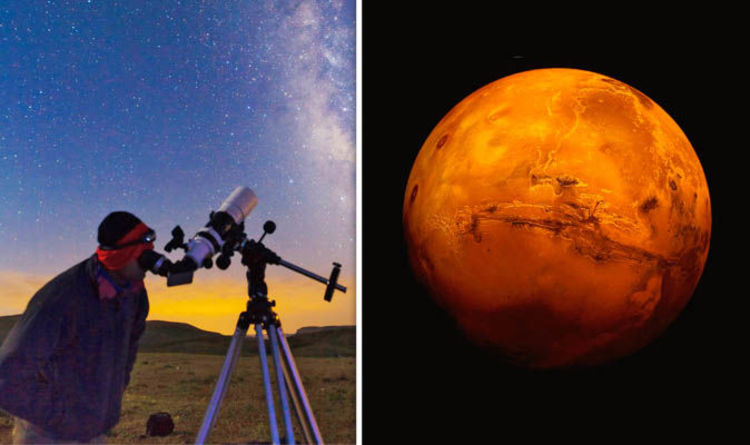 
Stargazers are in for a treat this month because Mars at opposition coincides with the magnificent total lunar eclipse Blood Moon on Friday, July 27.

Next week, the moon will pass through the Earth’s shadow and the Red Planet will be at its brightest and closest since at least 2003.

Dhara Patel, an astronomer at Royal Observatory Greenwich, told Express.co.uk the planetary opposition of Mars will be easily visible to the naked eye.

The space expert said: “Mars is a naked-eye planet so you can see it with just your eyes.

“However for the past few weeks, Mars has become considerably brighter in the sky as it approaches opposition on July 27.

“Opposition occurs when a planet is on the opposite side of the Earth to the Sun – the three bodies line up.

“This means that Mars is generally closer to the Earth than at any other time in its orbit and therefore it appears brighter in our sky.”

Where and when to look for Mars at opposition on July 27?

At opposition, the Red Planet will line up with the sun and rise just as the star sets on the horizon.

Ms Patel said Mars will creep up near the moon and over the southeastern horizon just after 9.30pm BST.

The space expert said: “ As the skies begin to darken, Mars’ brightness will begin to show and with dark adapted eyes you could make out its reddish hue too. It will look like a bright star.

“The best time to look for Mars is around midnight where it will reach its highest position in the southern part of the sky.

“Find the full moon and look below it for the bright point of light of Mars.

“By the end of June, Mars was five times brighter than usual and by the time Mars and Earth reach their closest approach it will be about twice as bright as it was at the end of June.”

The planet should be relatively easy to spot against the vast backdrop of stars thanks to its characteristic red colour.

How long will Mars at opposition last?

Although Mars may already appear exceptionally bright and larger than normal, the Red Planet will not make its closest approach to Earth until the end of the month.

Ms Patel explained: “Because the planets have elliptical orbits their distance at opposition can differ.

“Mars actually reaches its closest approach to the Earth on July 31 just a few days after the 27th, making this opposition one of the best.

“Mars will be at its brightest since the 2003 opposition when Mars and Earth were at their closest in 60,000 years.”

Between around July 7 and September 7, the Red Planet will remain the brightest object in the night sky after the sun, the moon and Venus.

A Weird Blob of Hot Gas Is Whizzing Around Sagittarius A* With ‘Mind-Blowing Velocity’ : ScienceAlert
Wolves Really Can Become Attached to Humans Like Dogs Can, Adorable Study Finds : ScienceAlert
The Orbit of a Sun-Like Star Reveals The Nearest Black Hole Ever Found : ScienceAlert
Scientists Are About to Fire Up The Most Powerful Laser in The US : ScienceAlert
Does IQ Decline as We Age? One Type of Intelligence Peaks in Your Twenties : ScienceAlert