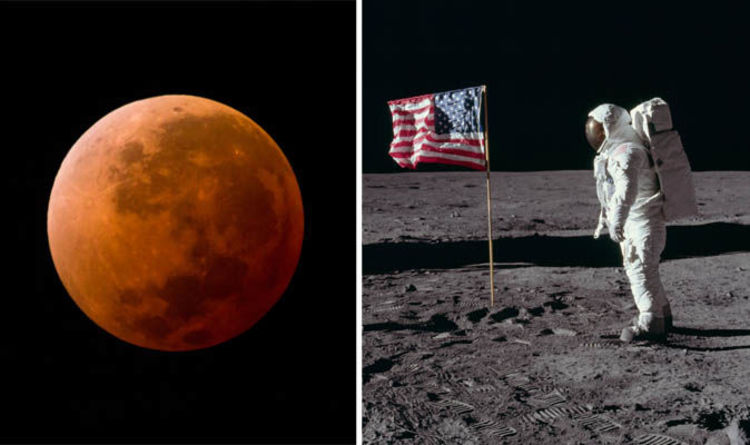 
Since Neil Armstrong and Buzz Aldrin of the 1969 Apollo 11 mission successfully planted their feet on the moon, another 10 more American astronauts have walked the surface of the moon.

Now with the Blood Moon eclipse on Friday, July 27, and the Apollo 11 anniversary on July 20, the moon is once again in the centre of the media’s attention.

Frans Von der Dunk, a distinguished professor of space law at the Nebraska College of Law, recently asked the question: “Who owns the moon?”

The US was the first and so far only nation to send manned crews to the lunar orb and the US flag is the only to be deployed on the moon.

But in an article penned in The Conversation, Professor Von der Dunk explained why the US cannot make a successful claim to territorial ownership of the moon – despite the historic achievement.

He wrote: “The simple answer to the question of whether Armstrong and Aldrin by way of their small ceremony did transform the moon, or at least a major part thereof, into US territory turns out to be ‘no’.

“They, nor NASA, nor the US government intended the US flag to have that effect.”

According to the space expert, the issue of moon ownership was solved at the height of the Cold War by the 1967 Outer Space Treaty – a document cosigned by the US and Soviet Union.

As the leading spacefaring powers of the century, the two nations agreed colonisation has wrought tremendous human suffering on Earth and should not extend towards space.

Professor Von der Dunk said the possibility of a “land grab” in space could have been perceived by either side of the Iron Curtain as a trigger in another world war.

The 1967 document made the moon legally accessible to all nations of the world just two years prior to the first manned moon landing.

The Russians themselves had made numerous unmanned launches to the moon, before and after the Apollo 11 mission.

And in many ways the Soviet space program was ahead of its American counterpart, having landed the Luna 2 probe on the moon in 1959 and having an orbital satellite in 1966.

But a number of failed rocket launches in 1971 and 1972 put the Soviets out of commission, forcing the space program to be canned.

After the 1969 landing, US space agency NASA extended an olive branch of agreement to the Soviets and the rest of the world by sharing the rock samples collected on the moon.

Professor Von der Dunk said: “The US flag was not a manifestation of claiming sovereignty, but of honouring the US taxpayers and engineers who made Armstrong, Aldrin, and third astronaut Michael Collins’ mission possible.

“The two men carried a plaque that they ‘came in peace for all mankind’, and of course Neil’s famous words echoed the same sentiment: his ‘small step for man’ was not a ‘giant leap’ for the United States, but ‘for mankind’.”

A Rare Condition Makes Hair Truly Untamable, All Thanks to These Genes : ScienceAlert
Shimmering ‘Lakes’ Under The South Pole of Mars Might Be Something Else Entirely : ScienceAlert
Behold, The Epic Last Images Taken by NASA’s Asteroid Redirection Test Spacecraft : ScienceAlert
Narwhals Are So Weird, Scientists Used Chaos Theory to Explain Their Behavior : ScienceAlert
Superconductivity Model With 100,000 Equations Now Contains Just 4 Thanks to AI : ScienceAlert