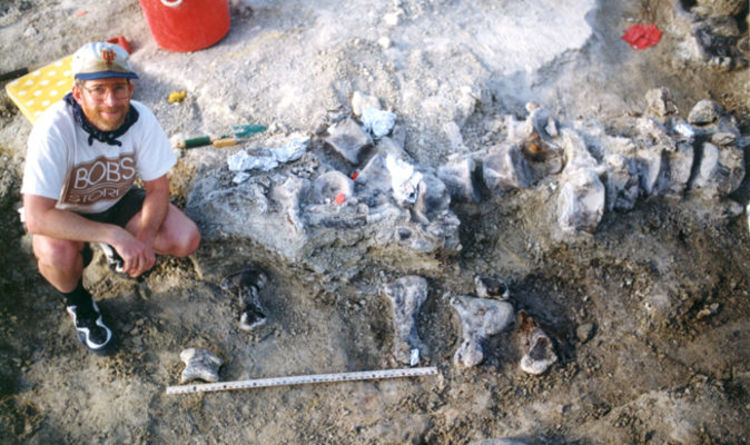 
The foot was excavated in 1998 by an expedition team from the University of Kansas which included Anthony Maltese.

But until now the identity of the dinosaur it belonged to, had remained a mystery.

The new findings, published in the journal PeerJ, also confirm that 150 million years ago brachiosaurs – featured in the movies Jurassic Park and Jurassic World – lived across a huge swathe of North America.

Study lead author Dr Maltese, now at the Rocky Mountain Dinosaur Resource Centre, said: “It was immediately apparent that the foot, nearly a metre wide, was from an extremely large animal, so the specimen was nicknamed ‘Bigfoot’.”

Study co-author Dr Emanuel Tschopp, a postdoctoral fellow in the American Museum of Natural History’s Division of Paleontology, also said: “There are tracks and other incomplete skeletons from Australia and Argentina that seem to be from even bigger animals, but those gigantic skeletons were found without the feet.

“This beast was clearly one of the biggest that ever walked in North America.”

Now, after thorough preparation and examination, the researchers have identified the foot as belonging to an animal very closely related to the long-necked, long-tailed sauropod Brachiosaurus, best known as the sauropod featured in the movie Jurassic Park.

They used 3D scanning and detailed measurements to compare the specimen to feet from numerous dinosaur species.

Their research confirms that it is the largest dinosaur foot discovered to date.

The study also shows that brachiosaurs inhabited a huge area from eastern Utah to northwestern Wyoming.

Dr Tschopp added: “This is surprising.

“Many other sauropod dinosaurs seem to have inhabited smaller areas during that time.”

Dr Malteses said that the rock outcrops that produced this fossil – the Black Hills region of Wyoming, famous today for tourist attractions such as Deadwood and Mount Rushmore – hold many more fantastic dinosaur skeletons.

The research team hopes to continue their studies on fossils from the Black Hills region.

Astronomers Think They Know The Reason For Uranus’s Kooky Off-Kilter Axis : ScienceAlert
Deep Brain Simulation Could Alleviate OCD When Other Treatments Have Failed : ScienceAlert
We Just Got Our Closest View of Europa in 20 Years, And We Can’t Stop Staring : ScienceAlert
Superconductivity Model With 100,000 Equations Now Contains Just 4 Thanks to AI : ScienceAlert
Control of a 6-Qubit Processor in Silicon : ScienceAlert