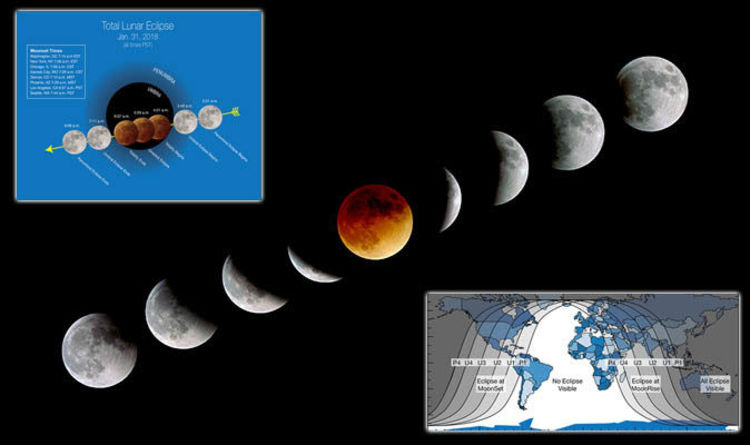 The celestial phenomenon, which will combine a supermoon, blue moon and blood moon, is forecast to rise on Wednesday, January 31.

Americans on the US’ west coast will be able to see the eclipse in the small hours before sunrise.

Totality will last a full one hour and 16 minutes, according to NASA, ending at 6.05am. This leaves plenty of time to take in the breathtaking views.

The main event comes later on the other side of the States, though there should still be enough time to see the eclipse before sunrise.

And budding astronomers in the UK are completely out of luck – the eclipse takes place in the middle of the day, when the moon has already fallen below the horizon.

The penumbral stage does not begin until 10.51am GMT in Britain, with totality occurring at 12.51pm.

NASA has confirmed that the best place to see the super blue moon eclipse will be along the west coast of the United States all the way up to western Canada.

Mr Johnston said: “Weather permitting, the west coast, Alaska and Hawaii will have a spectacular view of totality from start to finish.”

The NASA map above shows which parts of the world fall into the eclipse’s path of totality.

As with all astronomical events, the best viewing conditions can be found in rural locations away from any manmade light pollution.

Unlike their solar cousins, lunar eclipses do not require special glasses and can be viewed with the naked eye.

A telescope is not necessary, but can be used to view the blood moon in more detail.

New Yorkers and anyone living on America’s Atlantic coast are advised to wake early and travel to a high-up location to see the eclipse.

Mr Johnston said: “Your best opportunity if you live in the East is to head outside about 6.45am and get to a high place to watch the start of the eclipse.

Anyone living outside the eclipse’s shadow can still view the entire spectacle online. NASA will be live streaming the entire eclipse from 5.30am ET (10.30am GMT).