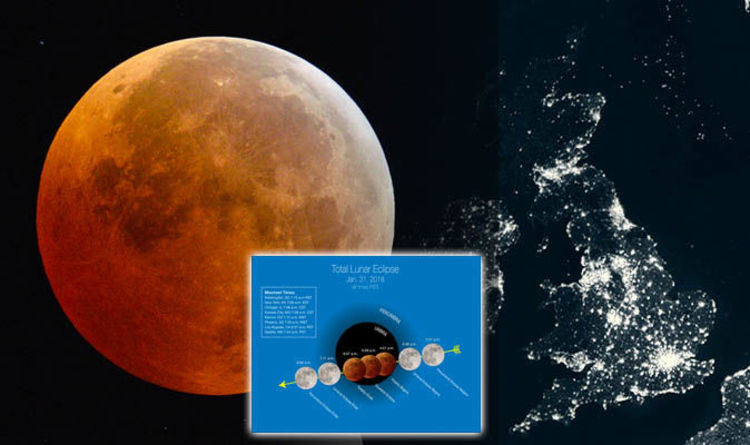 
Will the lunar eclipse rise over the UK?

Unfortunately for Brits, the blue moon eclipse, which occurs on January 31, will not be visible from the UK as it takes place below the horizon.

The penumbral stage will not begin until 10.51am GMT, with totality occurring at 12.51pm.

But those in the UK hoping to catch a glimpse of the spectacle should not despair, as the entire eclipse will be available to stream online.

Robotic telescope service Slooh will be livecasting the eclipse from 10.45am GMT on January 31 (5.45am ET).

The broadcast will include commentary and analysis from a number of experts and is due to run for more than five hours.

Despite not being able to see the lunar eclipse in the sky, Britons will still be able to enjoy a super blue moon tonight.

This phenomenon occurs when a blue moon – the second full moon in a calendar month – is orbiting closer to Earth than usual, making it appear about 14 percent larger in the sky.

The celestial event will combine three separate lunar spectacles – a blue moon, a supermoon and a total lunar eclipse.

For spectators in North America, this will be the first time all three events occur simultaneously since 1866 – more than 150 years ago – though other parts of the world did experience a blue moon total lunar eclipse in December 1982.

Viewers can expect the moon to turn a reddish hue during the eclipse due to to a quirk of the Earth’s atmosphere which will create a rare Blood Moon.

January 31 will mark the last in the space agency’s so-called ’Supermoon Trilogy’, the first of which rose at the start of December.