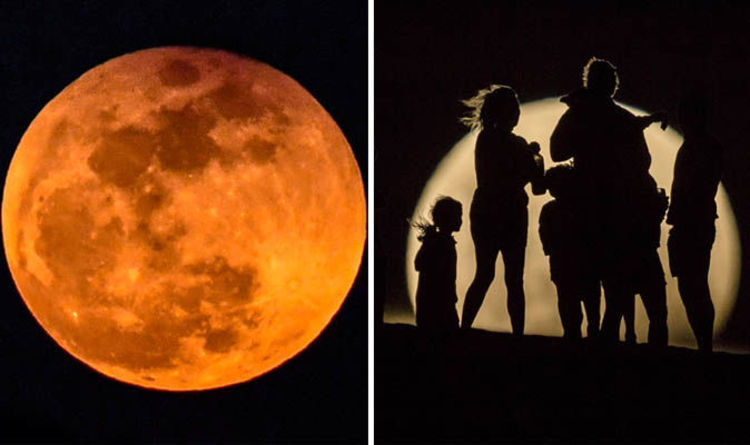 
January 31, 2018 saw a combination of a supermoon, blue moon and blood moon, creating a huge glowing crimson orb visible in Australia, eastern Asia, parts of Canada and the west coast of the USA.

Live footage of the super blue blood moon was live-streamed by NASA while thousands of others gathered on hilltops and in rural spots to witness the spectacle as the moon, Sun and Earth aligned for an hour and 16 minutes.

UK watchers were not able to see the blood moon eclipse, which lasted more than four hours in total, as it happened during daylight hours but last night they did get to witness a super blue moon.

Beautiful images taken by professional photographers showed an enlarged golden moon rising above St Paul’s Cathedral and the Shard in London, while similar images were taken in enlightened fields in Scotland.

The blue moon – the name given to the second full moon in a calendar month – was also a supermoon, appearing 14 percent larger and 30 times bigger than average.

According to NASA, the moon was at its closest orbit to Earth meaning it was 223,068 miles from our planet rather than the usual 238,855 miles.

But disappointed viewers who missed out on the whole celestial spectacle may not have to wait another 150 years for the rare sight to return.

When is the next super blue blood moon after 2018?

The all-important combination of a blue moon, supermoon and lunar eclipse won’t take place until January 31, 2037, according to Space.com.

That is 19 years away – but it is obviously much better than another 150 year wait.

The 2037 super blue blood moon will be visible in the UK and Europe, as well as North America, Asia, Australian and parts of Africa.

That will not coincide with a supermoon but the difference is not likely to be noticeable for casual skywatchers.

But if that still seems ridiculously far away, July 27 to 28 2018 marks the next total lunar eclipse.

That once will cover most of Europe and Asia, Australia, Africa and South America as well as the south of the USA.

And on January 21, 2019, there will be another lunar eclipse combined with a supermoon.