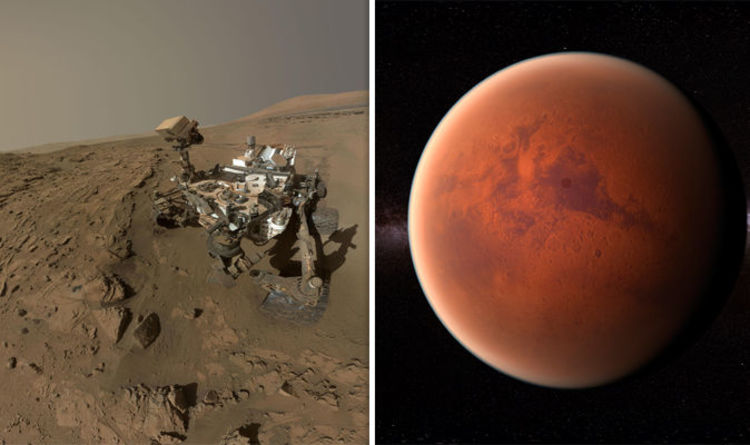 
The Red Planet looks eerily similar to Earth in some of the snaps, including a stunning panoramic view which would be difficult to differentiate from our home planet.

The rover, which landed in the Gale Crater of Mars in 2012, has captured 16 separate scenic views of Mars along the Vera Rubin Ridge which NASA then compiled into a stunning panoramic image.

Incredible images, which were sent back to Earth on October 25, 2017, give an unprecedented view of the 11 mile trek along the ridge.

Curiosity Project Scientist Ashwin Vasavada of NASA’s Jet Propulsion Laboratory, Pasadena, California, said: “Even though Curiosity has been steadily climbing for five years, this is the first time we could look back and see the whole mission laid out below us.

“From our perch on Vera Rubin Ridge, the vast plains of the crater floor stretch out to the spectacular mountain range that forms the northern rim of Gale Crater.”

In the stunning image, the viewer can see where the rover landed, in Bradbury.

Also, in the foreground one can see Mount Sharp, one of the biggest mountains on Mars which is a staggering 96 miles in diameter.

The mountain is more than 50 miles away from where the Curiosity Rover snapped it, but due to the thin atmosphere on Mars, it can be seen in almost crystal clear definition.

The reason behind the celebratory images is that the Curiosity Rover has now sent back more than a gigabit of data “during a single relay session from Mars for the first time in history”.

NASA is now preparing to utilise the drill on the machine to dig of rock samples that will help unravel the mysteries of Mars.

Previous samples have shown that in the Gale Crater, there is an abundance of mineral deposits which provide evidence that there was once water and that environmental conditions are suitable for life.

The Curiosity Rover is taking samples every 25 metres along the Gale Crater – the lowest point on Mars which has led scientists to believe that there was once a great lake there.

The upper layers of the crater contain a large amount of oxidising hematite, which suggests that it was once acidic.