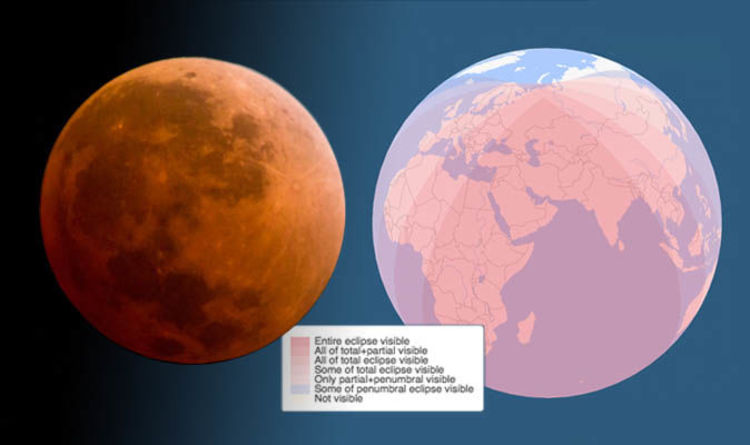 The rare Blood Moon eclipse will peak tonight (Friday, July 27) when the full Moon crosses the centre of the Earth’s shadow, or umbra.

The total lunar eclipse will be visible across large swathes of the globe, with totality starting at 7.30pm Universal Time.

From start to finish, the Moon’s phase of totality will last a whopping one hour and 43 minutes, making it the longest lunar eclipse of the 21st century.

Additional penumbral and partial eclipsing around totality will see the Blood Moon eclipse last around six hours and 14 minutes.

During totality, scattered sunlight in the Earth’s dusty atmosphere will make the full Moon glow a deep red to orange colour.

EarthSky astronomer Guy Ottewell said: “The umbra is the core shadow. No sunlight reaches it directly, but varying amounts can be refracted into it by Earth’s atmosphere.

“This is why it can appear brownish or even reddish, in patterns that vary at every eclipse.

“It is why the media have taken to calling a totally eclipsed moon a Blood Moon.

Will the Blood Moon lunar eclipse be visible in your area?

The lunar eclipse will be mostly confined to the Eastern Hemisphere tonight, rising over Central Asia and Eastern Africa.

The penumbral phase of the eclipse will see a faint shadow creep across the glowing face of the Moon over Australia, New Zealand, Malaysia, Indonesia, Vietnam, Laos, Cambodia and countries to the west up to the East Coast of Africa.

Penumbral eclipsing will kick off at 5.14pm UT or 6.14pm BST – but will not be visible from the UK.

As the Moon sails across the night skies to the west, the real show will begin centrally over India, Bangladesh and Pakistan.

The partial eclipse will kick off in this part of the world at 6.24pm UT and will be visible as far out as the Southwest Coast of Africa.

The map above outlines the Moon’s apparent movement in the sky and the extent of the eclipse’s reach.

Areas with lighter shading to the left and right of the Moon will experience the eclipse just after moonrise or sunset.

Lighter shaded areas to the right of the eclipse will see the lunar eclipse right until moonset or sunrise.

By 7.30pm UT, the real spectacle will begin when the full Moon enters the Earth’s darkest shadow and reaches totality.

This will be the moment the moon turns a spectacular red colour out over the Indian Ocean, to the East of Madagascar.

The eclipsed Blood Moon will still be visible to Australia, China, Vietnam, Malaysia, Indonesia and India.

This phase of the eclipse will last approximately one hour and 43 minutes and will peak at maximum eclipse at 8.21pm UT or 9.21pm BST and will be visible from the UK.

Maximum eclipse or greatest eclipse marks the moment the moon reaches the dead-centre of the umbra and from then on the eclipse will slowly head towards the finish line.

After this, the path of totality will continue to move towards the UK and South America with the Moon moving directly over South Africa, Botswana, Lesotho and Swaziland.

But stargazers will still be treated to the second half of the partial eclipse, which will see the Moon dip out of the Earth’s shadow by 10.19pm UT (11.19pm BST).

The penumbral stage of the eclipse will wrap up by 11.28pm UT (12.28am BST) and the Moon will return to its normal white glow.

The penumbral eclipse will end just off the coast of Eastern Africa and the moment will be visible all the way up to Brazil and beyond but not Central or North America.

On the other side of the globe, the sun will already feature high in the sky, bathing Australia, New Zealand, Papua New Guinea, Japan and most of China in its warm glow.

Stargazers in the US, Canada and Central American nations will miss out on the eclipse entirely tonight. 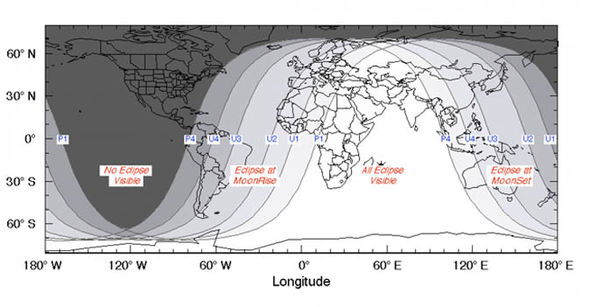 If you live in this part of the world, follow Express.co.uk for the latest astronomy livestreams of the Blood Moon eclipse, which you can find here.

Cloudy skies and rain could all hinder the moon-gazing experience.

But the good news is the total lunar eclipse will make another appearance on the night of January 21, 2019.

What times will the Blood Moon eclipse phases start?

These are the individual passes of the Blood Moon eclipse in Universal Time:

Hubble And Webb Pics Reveal DART Impact Was Even Bigger Than Expected : ScienceAlert
These Are The Most Distant Star Clusters Ever Seen, And We Nearly Missed Them : ScienceAlert
‘Dark Data’ Is Leaving a Huge Carbon Footprint, And We Have to Do Something About It : ScienceAlert
Weight Lifting in Old Age Does More Than Just Keep Your Muscles Strong : ScienceAlert
Superconductivity Model With 100,000 Equations Now Contains Just 4 Thanks to AI : ScienceAlert