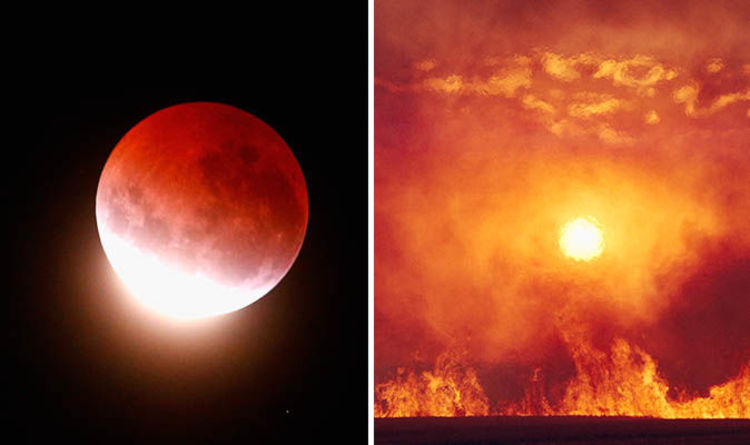 
The next total lunar eclipse, often called a Blood Moon, due to the reddish tinge the Full Moon takes on, will take place on July 27.

A total lunar eclipse happens when the Moon travels through the Earth’s umbra and blocks all direct sunlight from illuminating the Moon’s surface.

However some sunlight still reaches the lunar surface directly, via the Earth’s atmosphere, bathing the Moon in a reddish, yellow or orange glow.

What is the significance of Blood Moon?

The Blood Moon holds a lot of spiritual significance and there are many prophecies it signifies the end of the world.

The Book of Joel 2:30-31 writes: “And I will show wonders in the heavens and in the earth, blood, and fire, and pillars of smoke.

“The sun shall be turned into darkness, and the moon into blood, before the great and the terrible day of the Lord come.”

Acts 2: 19-20: “And I will show wonders in heaven above, and signs in the earth beneath; blood, and fire, and vapour of smoke. The sun shall be turned into darkness, and the moon into blood, before that great and notable day of the Lord come.”

The Blood moon prophecy is a series of apocalyptic beliefs which is promoted by end time preachers.

The prophecy states that a tetrad –  a series of four consecutive lunar eclipses, coinciding on Jewish holidays, with six full moons in between and no intervening partial lunar eclipses is a sign of the beginning of the end times.

However the tetrad ended with the lunar eclipse on September 27-28, 2015, and the end of the world has not happened yet.

Astrologers believe an eclipse has an effect on people’s emotions and as the July 2018 total lunar eclipse is the longest lunar eclipse this century it only intensifies its cosmic energy.

“Mars’ anger and frustration could easily turn to reckless actions because of a harsh aspect to Uranus. A more gentle influence from Saturn will make it a little easier to calm down, and some fixed stars give patience and decisiveness in a crisis.

“However these same stars can also cause aggression and emotional problems.”

Does it mean the End of World?

However Indiana-based Christian preacher believes July 27 is not the end of the world.