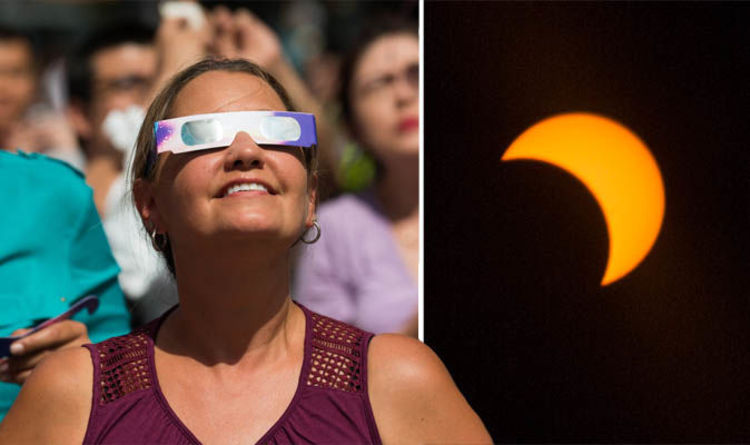 
The upcoming partial eclipse is the third in a series of eclipses which began last month on Friday, July 13.

The eclipse will see the August New Moon take a chunk out of the glowing disc of the Sun in the morning hours of Saturday, August 11, Universal Time.

Stargazers lucky enough to find themselves in the Northern Hemisphere on the day of the eclipse could see up to 50 percent of the Sun hide behind the Moon.

But what about viewers in the US? After all, stargazers in North America missed out on the brilliant Blood Moon lunar eclipse on July 27 and a partial eclipse on July 13.

Unfortunately, it appears as though the trend of bad luck continues this weekend for any American living below the Arctic Circle.

Most partial solar eclipses tend to take place low on the horizon and close to the Earth’s polar regions.

This year this means the eclipse will stay close to the North Pole in contrast to the July 13 eclipse which peaked over Antarctica in the South.

The August partial eclipse will kick off over the icy waters of the North Atlantic and Greenland around 8am UT (9am BST) and move over the top of the planet towards Asia.

As the eclipse passes over the Earth, the Moon’s shadow cast by the eclipsed Sun will brush against some of the more sparsely populated parts of Canada.

This includes remote villages and communities in parts of the Canadian Arctic Archipelago, such as Nunavut, Eureka and Resolute Bay.

The eclipse will also be visible from the northernmost parts of Scandinavia, in places such as the small mining community of Longyearbyen in Norway and Rovaniemi in Lapland, Finland.

The Norwegian-controlled archipelago of Svalbard, which last saw a total solar eclipse in 2015, will be well positioned to see about 45 percent of eclipse coverage.

Once the eclipse dips over to other side of the planet it will be visible in Russia, China, Mongolia and North and South Korea.

In the Korean capitals of Seoul and Pyongyang, audiences could see a narrow band of visibility obscure around 35 percent of the Sun’s face.

In Shanghai, China, up to 20 percent of the Sun could disappear behind the New Moon.

When is the next eclipse visible from the US?

Once the August eclipse passes into obscurity, the United States will have to wait until January 2019 for the next solar eclipse sighting.

A partial solar eclipse between January 5 and January 6 will be visible from the North Pacific and Northeast Asia, extending to some remote parts of Southeastern Alaska.

Thereafter a much more spectacular total lunar eclipse Blood Moon will peak over the continental US on the night of January 21, 2019.

At the same time, the Blood Moon will be visible in East Russia, Europe and a partial eclipse will be seen in West Africa.

Stargazers in the UK will see the total eclipse from start to finish.

The following total solar eclipse on July 2 will only be visible over the South Pacific and South America.

Another partial lunar eclipse on the night of July 16 and July 17 will brush against parts of Northeast Canada and Central America but will skip the US.

Weight Lifting in Old Age Does More Than Just Keep Your Muscles Strong : ScienceAlert
These Are The Most Distant Star Clusters Ever Seen, And We Nearly Missed Them : ScienceAlert
Shimmering ‘Lakes’ Under The South Pole of Mars Might Be Something Else Entirely : ScienceAlert
Control of a 6-Qubit Processor in Silicon : ScienceAlert
Hubble And Webb Pics Reveal DART Impact Was Even Bigger Than Expected : ScienceAlert