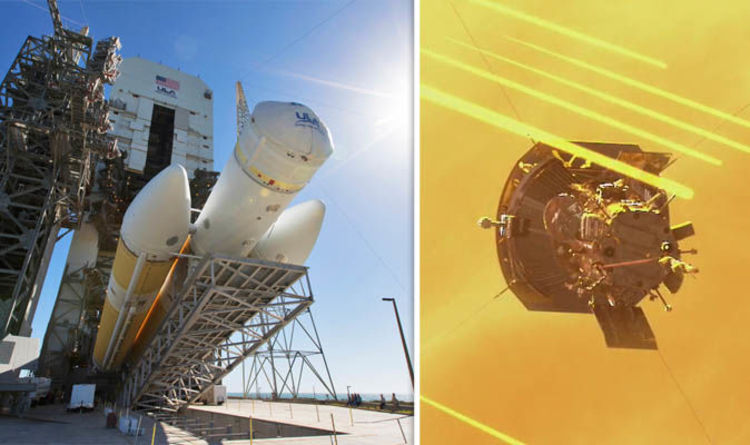 
The world’s first ever spacecraft to touch the Sun will blast off from Earth in the morning hours of Saturday, August 11.

The NASA space probe will liftoff from the Cape Canaveral Air Force Station in Florida at 3.45am EDT (8.48am BST).

And the good news is the monumental rocket launch will be broadcast online for the world to see.

You can tune in to Express.co.uk on the morning of the launch to see a NASA Delta IV-Heavy rocket fire off into space.

Courtesy of NASA TV, the US space agency’s around-the-clock educational broadcasting, you can watch the launch live stream here.

The embedded NASA live stream below will start its coverage of the launch from 3am ET (8am BST) until 4.30am ET (9.30am BST).

NASA’s first launch opportunity opens up for a brief window of time at 3.33am ET (8.33pm BST).

NASA said: Prelaunch and launch day coverage of Parker Solar Probe will be available on the NASA website.

“Coverage will include live streaming and blog updates beginning at 3am as the countdown milestones occur.

“On-demand streaming video and photos of the launch will be available shortly after liftoff.”

Weather permitting, the Delta-IV rocket will be well on its way this Saturday to approach within 3.8 million miles (6.1 million km) of the Sun’s surface.

Nicola Fox, project scientist at Johns Hopkins University said the solar mission is the “hottest” and “coolest” project under the Sun.

The Parker Solar Probe roughly measures the same size as a small car and will be the first ever spacecraft to study the Sun’s atmosphere up close.

On its incredible voyage to the heart of the solar system, the space probe will use gravitational boosts to travel at breakneck speeds of of 430,000 mph (700,000 kph).

The primary objective of the rocket launch is for NASA to study the powerful solar winds radiating from the Sun into space.

Dr Fox said: “There are missions that are studying the solar wind, but we’re going to get to the birthplace.”

The Parker probe comes equipped with tools for measuring the Sun’s magnetic fields, radiating plasma and energetic particles and instruments to capture snapshots of the Sun’s billowing solar winds.

To protect the probe from the Sun’s monstrous temperatures, the Parker probe is protected by an eight foot-tall (2.4m) heat shield which is 4.5 inches thick (11cm).

Eugene Parker, professor emeritus at the University of Chicago and the space probe’s namesake, said the incredible probe is ready for the mission.

He said: “This is a journey into never-never land, you might say, where it’s too hot for any sensible spacecraft to function.

“But some very clever engineering and construction have succeeded in making what looks like a very workable instrument.”

Mr Parker said he is “holding his breath” for everything to go well on Saturday.

Weight Lifting in Old Age Does More Than Just Keep Your Muscles Strong : ScienceAlert
Behold, The Epic Last Images Taken by NASA’s Asteroid Redirection Test Spacecraft : ScienceAlert
Biology Inspires a New Kind of Water-Based Circuit That Could Transform Computing : ScienceAlert
Secret Clues in Tutankhamun’s Tomb Reignite The Idea That Nefertiti Is Hidden Nearby : ScienceAlert
Ancient Burial of a Young Girl Shows How We Carried Our Babies 10,000 Years Ago : ScienceAlert