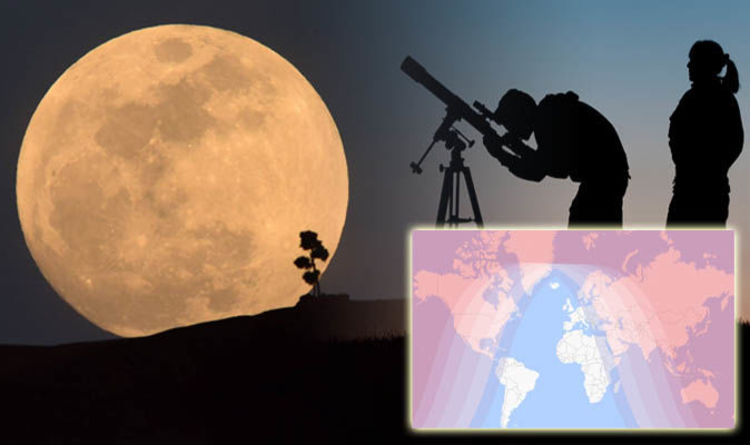 Viewers can expect to see a blue moon – the second full moon in a calendar month – orbiting closer to the Earth than normal, making it seem up to 14 percent larger and 30 percent brighter in the sky.

If that wasn’t enough there will also be a total lunar eclipse – often described as a blood moon because of the way the moon turns a bright coppery red.

The eclipse is expected to reach totality at about 4.50am PT on the west coast of the US, where skywatchers will get some of the best views.

The spectacle, which NASA has dubbed a “lunar trifecta”, is the last in a trilogy of supermoons since the start of December.

Bringing you the latest eclipse 2018 news, live updates and pictures from NASA and across the globe.

9am: Blood moon is ‘most spectacular’ of events, says NASA scientist

Noah Petro, from NASA’s Lunar Reconnaissance Orbiter, has said that the blood moon eclipse is the most impressive of the three lunar spectacles on display today.

Speaking to Space.com, he said: “The eclipse is really the most spectacular of the events, because those are the ones that are the most visually stunning

“The supermoon is wonderful because you get to see this slightly larger, brighter moon in the night sky, but it’s really the eclipse that’s going to obscure the supermoon – the brightness will change to that beautiful rusty red colour that people are accustomed to seeing during lunar eclipses.”

Tanya Hill of the Melbourne Planetarium said: “This one is going almost right into the centre of the Earth’s shadow, so it will be lovely and long.

“Slowly you’ll see that shadow move across the Moon until it completely engulfs it. That’s when we have the beautiful colour of totality forming.

“After an hour or so the Moon will start to emerge and you’ll start to see the moon brightening up as it completely drifts away from the Earth’s shadow.

“If you do have a telescope or binoculars you do get to see a better or closer view, but it’s certainly not required to watch that shadow cross.

“They’ll have a really fantastic view of this strangely large moon as it wanders into Earth’s shadow.”

The eclipse will reach totality late this evening and into tomorrow morning in Australia and New Zealand.

Stunning photos of the super blue blood moon have already started flooding in from all corners of the globe.

In Los Angeles, a bright orangey moon loomed as a pair of Americans looked on, while a larger-than-average moon was also photographed rising next to the Parthenon in Athens, Greece.

More awe-inspiring imagery is expected later in the day when the eclipse reaches totality.

Below is a breakdown of what time totality will occur across the United States (All local times):

Read more: WHEN IS THE SUPER BLUE BLOOD MOON IN YOUR AREA?

Ancient Maya Cities Appear to Have Been Riddled With Mercury Pollution : ScienceAlert
Engineers Gave a Car a Pair of Eyes to Make Future Roads Safer For Pedestrians : ScienceAlert
Hubble And Webb Pics Reveal DART Impact Was Even Bigger Than Expected : ScienceAlert
A Rare Condition Makes Hair Truly Untamable, All Thanks to These Genes : ScienceAlert
Amazing New Fossils Provide Earliest Known Traces of The Evolution of Our Jaws And Limbs : ScienceAlert