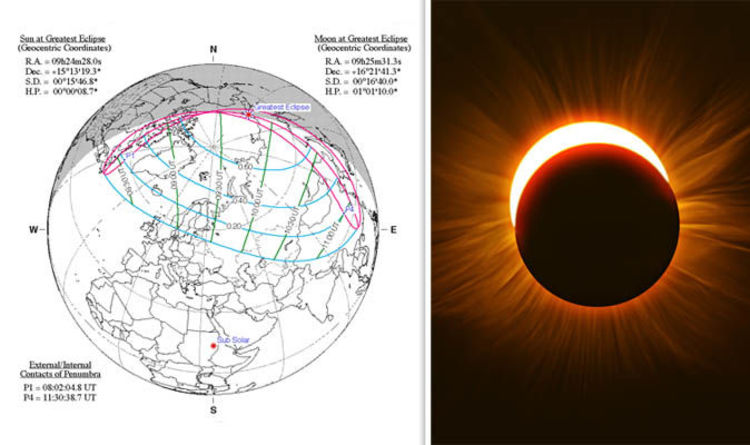 
Following the disappointment of poor weather completely obscuring the July Blood Moon from the UK, stargazers are now eager to see the August solar eclipse.

The partial eclipse of the Sun will peak in the morning hours of Saturday, August 11.

The eclipse will be exclusively seen from the Northern Hemisphere this time around, starting over the North Atlantic and Greenland.

Unfortunately for any UK astronomer waiting with bated breath, this means the partial eclipse will not be visible from the UK.

The August eclipse will be initially limited to those parts of the world close to the North Pole and below the Arctic Circle.

This excludes most of Europe south of Scandinavia, including the UK.

There is a small chance a select few might see a tiny fraction of the Sun disappear from the northernmost reaches of Scotland, but the odds are remote.

The Newbury Astronomical Society announced: “Is everyone in the UK excited about the partial solar eclipse on August 11?

“Probably not, it is only visible from far north of Scotland as a very small partial eclipse.

“If you are up there do make an effort. A picture of a convenient prominence eclipsed would be cool.”

The August eclipse will start over the Atlantic Ocean around 8.02am UT (9.02am BST) and slowly creep over the top of the planet.

As the eclipse travels northeast, the shadow cast by the Sun and the Moon will make its way towards North Russia, Central and East Asia.

Once the Moon’s eclipsed shadow moves over Mongolia, China and North and South Korea the partial eclipse will wrap up by 11.30am UT (12.30pm BST).

But there is another spectacular astronomical event on the horizon just one day after the partial solar eclipse – the annual Perseid meteor shower.

The dazzling Perseid shower peaks this year between the nights of August 11 and August 13 with the best visibility in the pre-dawn hours on Monday, August 13.

The annual shower is the second most active meteor shower of the year right after the Geminids in December.

During this weekend’s peak, astronomers expect anywhere between 50 and 60 fireballs to dash across the night sky.

Previous Perseid meteor showers have been known to produce up to 200 meteors during the peak and viewing conditions this year are as close to perfect as they can be.

With no bright moon in the skies this weekend – we are in the darkened New Moon lunar phase – the moonless skies will not wash out some of the fainter shooting stars.

The British Astronomical Association advises looking for the meteors between 10pm BST on Sunday and the pre-dawn hours on Monday.

Control of a 6-Qubit Processor in Silicon : ScienceAlert
We May Finally Know Why Oceans in The Southern Hemisphere Are Getting So Warm : ScienceAlert
Astronomers Think They Know The Reason For Uranus’s Kooky Off-Kilter Axis : ScienceAlert
Long COVID Is Still Raising More Questions Than Answers, Say Researchers : ScienceAlert
3 Major Aquatic Animal Groups Can Trace Their Lineage to This Ancient Armored ‘Worm’ : ScienceAlert