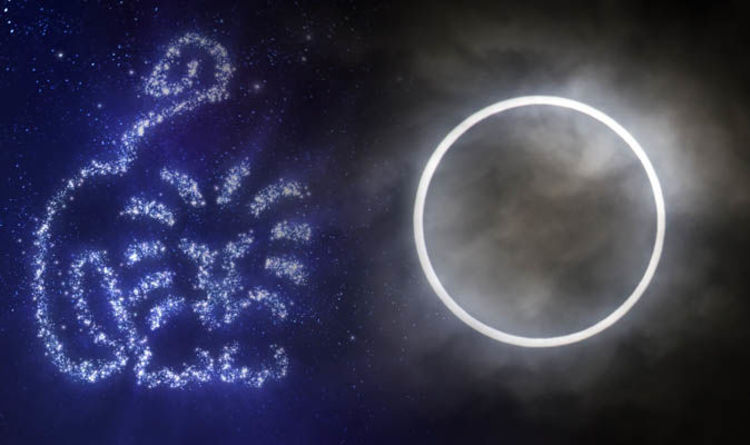 
A significant portion of the sun will hide behind the darkened face of the Moon during the partial solar eclipse on August 11 next week.

The partial eclipse of the sun is the third of its kind this year and the conclusion to this summer’s trio of eclipses between July and August.

Other than the eclipse being a brilliant spectacle of astronomy observable from Earth, the eclipse will have absolutely no impact on the planet whatsoever.

But astrologers who believe the movements of the stars and planets have esoteric powers have claimed the solar eclipse will influence our lives in the coming days with powerful energies.

According to astrologer Michael Conneely, there is a “very big energy” spread out through July and August, concluding with next week’s eclipse.

He claimed this is an “intensely inspirational time” because the planet of revolution and inspiration, Uranus, is involved in these eclipses.

Mr Conneely said the eclipse will occur at 18 degrees in Leo with its north node conjunct to the planet Mars, which will supposedly release strong energies.

He said: “It has many levels of manifestation, technical skill, aggression and war, politics and of course the personal level for you and how you may decide to use it.

“Decide to use it for the best because it has some terrible applications, particularly if it’s on a malefic planet of yours.

“So, what I want to say is that eclipses, of course, are earthquake energy but they really can bring an earthquake in your life, particularly if you are off course.

“That’s because tension is building up and like earthquakes are created by tension they release tension held in the earth’s crust.

“They can be incredibly destructive but they do frequently occur at eclipse times and at times of energy like the Mars conjunction, which is producing volcanoes and forest fires.”

Fellow astrologer Barbara Goldsmith argued August will usher in a chance for a fresh start for Aquarius.

The astrologer said Mars and Mercury in retrograde paired with the New Moon solar eclipse make for a very interesting month ahead.

She said: “The key this month is for you to remember that with Mars still retrograde to breathe.

“If things aren’t moving as quickly as you would like them to, just relax, release, surrender let go and allow things to just happen because you might be pleasantly surprised.

“Sometimes when you let go of the reigns, you let go of control and you let the universe deliver to you whatever is coming to you. You might have a very pleasant surprise.”

The partial solar eclipse of the Sun will peak over the Northern Hemisphere just before 11am UK time, but the eclipse will not be seen from the UK.

The eclipse will be visible from certain parts of Scandinavia, Canada, Asia, Greenland and Iceland.

Maritime astronomer Bruce McClure said: “On a worldwide scale, the partial eclipse lasts about 3.5 hours, starting at sunrise in northeastern North America and ending at sunset along the Asian Pacific Coast.

“If you’re in a position to witness this eclipse, be sure to use proper eye protection.”