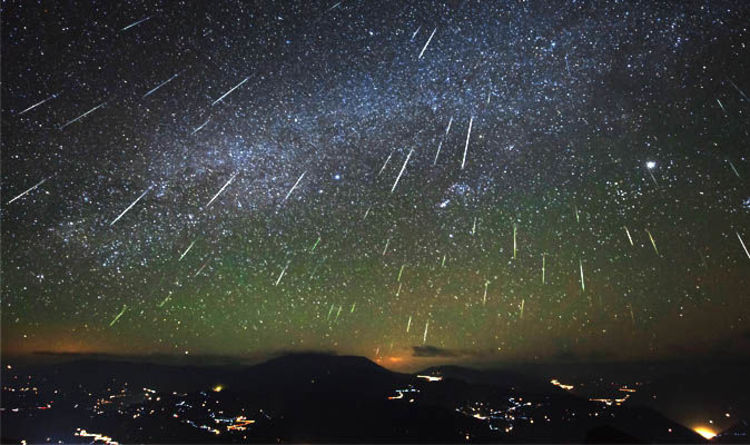 
The Perseid meteor shower happens every year roughly around the same time when the Earth passes through the cosmic trail of Comet Swift-Tuttle.

The shower typically starts around mid-July and slowly grows in intensity over the following few weeks until it peaks mid-August.

Once the shower peaks, the number of fireballs streaking across the sky drops dramatically until Earth leaves Swift-Tuttle’s orbit by the end of August.

Past Perseid showers have been known to produce up to 100 meteors and hour and this year Dr Morgan D. J. Hollis, Royal Astronomical Society, expects the number to come close to that.

The space expert told Express.co.uk the shower will peak over the UK on the night of Sunday, August 12 to Monday, August 13.

During this peak Dr Hollis expects tens of brightly lit space rocks to zoom across the starry skies.

The astronomer said: “The Perseid shower happens every year around August, and this year will peak on the night of August 12.

“Observers can expect to see a few tens of meteors per hour – up to one a minute – once darkness has fallen, with a peak just before sunrise on August 13.”

Throughout the duration of the shower the meteors will appear to burst out into the sky near their namesake constellation, Constellation Perseus.

As the small space rocks left behind in the cosmic dust of Swift-Tuttle slam into the atmosphere at breakneck speeds they disintegrate in a ball of fire and light.

If you are lucky enough, you might spot one or two spectacular fireball meteors blazing across the sky.

Viewing conditions this year look to be particularly favourable thanks to the presence, or lack of, of the New Moon.

Around the night of the shower’s peak the New Moon will be shrouded by the darkness of Earth’s shadow.

This should leave the skies plenty dark to see the meteors without hindrance from the Moon’s otherwise bright light.

Dr Hollis said: “This year the conditions will be very good for observing the shower.

“The New Moon on August 11 means the sky will be very dark, maximising the chances of seeing lots of meteors.

“The shower will be visible from most of the northern hemisphere, weather conditions permitting.”

The astronomer advises looking for the meteors by facing the eastern skies where Perseus sits at night.

You should be able to start seeing some of the Perseid meteors after the skies go dark as well as on the nights immediately before and after the peak.

Over London, the skies will go dark after moonrise around 9pm BST.

We Have Our First Look at Neptune’s Rings in 33 Years, And They’re Glorious : ScienceAlert
Wolves Really Can Become Attached to Humans Like Dogs Can, Adorable Study Finds : ScienceAlert
Does IQ Decline as We Age? One Type of Intelligence Peaks in Your Twenties : ScienceAlert
Experiment Reveals What 1 Hour in Nature Does to The Human Brain : ScienceAlert
Early Puberty in Girls Surged in The Pandemic, And We May Finally Know Why : ScienceAlert