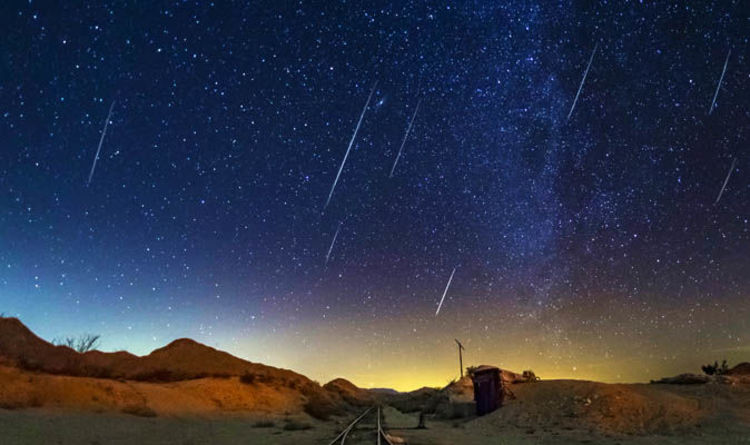 
Outdoor conditions next week promise to be perfect for seeing the meteor shower, with warm temperatures, the lack of a glowing Moon and hopefully clear skies.

But the Perseids are expected to peak between the night of August 12 and August 13, which might not be ideal for those who would rather stay in bed.

For those of you who want to catch a glimpse of the Perseids without having to leave the comfort of your home, you can watch the meteors with robotic telescope service Slooh.

The Perseids live stream will feature guest appearances from Slooh’s resident space experts who will guide audiences through the event.

Slooh teased: “Join us throughout the night of August 12 as we look to the sky with Slooh astronomers Paul Cox and Dr Paige Godfrey, as well as Slooh’s storyteller Helen Avery.”

The Perseids are the cosmic debris left behind in the orbital path of Comet Swift-Tuttle.

Every year from around mid-July to the end of August the planet Earth passes through the comet’s trail, leaving the meteors to burn up in the atmosphere.

During the peak, the shower can create between 50 and 60 meteors an hour but past Perseid showers have been known to produce up to 100.

Slooh explained: “Like most meteor showers, the Perseids are sand grain sized debris shed from a comet, in this case, Comet Swift-Tuttle.

“As the Earth passes through the comet’s debris trail every year, some particles enter our atmosphere and vaporise, generating the bright streaks we call meteors.

“The Perseid Meteor Shower build slowly, starting in late July when you might see three to four an hour.

“They peak when Earth passes through the densest part of the cometary debris stream on August 12 to 13.”

If you do decide to look out for the Perseid’s outdoors you should seek out the shooting stars in the eastern skies near the Constellation Perseus.

Scout out a quiet and dark location where you will find an unobstructed view of the horizon and the skies.

Once you find the perfect spot, simply look up and try to embrace as much of the dark skies as possible.

The Perseids will flyby at breakneck speeds in every direction imaginable, so lie back and relax.

Slooh advised: “You don’t need binoculars or a telescope. Nor do you need to look right at the constellation of Perseus: the meteors can appear anywhere in the sky.

“Because the radiant lies in Perseus, northern-hemisphere observers get the best view, although southerners will see some, too.”