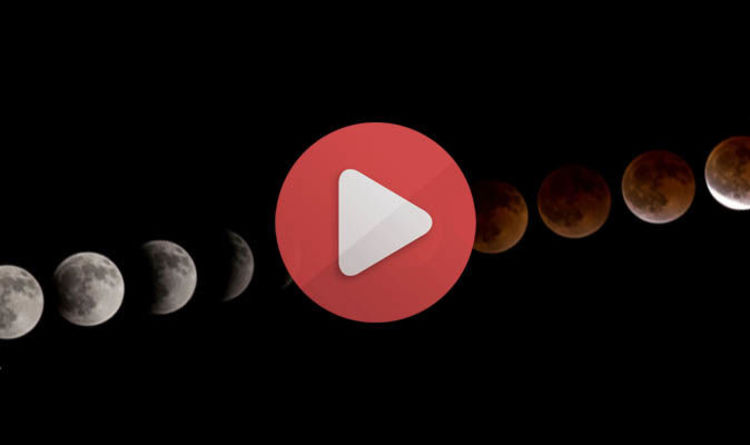 
The first total eclipse in two years will disappear from sight in the early morning hours when the Penumbral Eclipse begins at 10.51am GMT (5.51am EST).

During the eclipse, the sun and Earth will perfectly line up to to cast a dark shadow across the surface of the moon.

The first lunar eclipse of the year is particularly special because it is the first in 150 years to coincide with a blue moon.

Unfortunately for viewers out of the Eastern Hemisphere, the spectacle is limited to West north America and large swathes of Asia. Viewers in other parts of the world will miss out.

But the good news is that robotic telescope service Slooh will train its telescopes on the moon tomorrow to stream live the show straight to your homes.

Space boffins and astronomy amateurs alike have been invited to partake in the official Slooh Blue Supermoon Total Lunar Eclipse livecast, kicking off at 10.45am GMT (5.45am EST) tomorrow.

Slooh will stream live the entire event for five hours, with the total phase of the eclipse expected to last one hour and 16 minutes.

The telescope streamer said: “The Supermoon Trilogy we’ve been experiencing since December will end with a bang on January 31, combining a Supermoon, a Blue Moon, and a Total Lunar Eclipse.

To guide the audience through the science behind the blue moon eclipse, Slooh’s dedicated team of space experts and astronomers will participate in a live Q&A and guide.

During the stream, Slooh will also announce the winners and runners-up of the first Fenimore Cooper Prize for Eclipse Writing contest.

But the options do not end there because NASA will host its very own supermoon online stream. Find out how to watch the NASA total lunar eclipse stream here.

Astronomers are excited for tomorrow’s lunar event for a multitude of reasons.

Firstly, the blue moon is a rare event when a second full moon rises in one calendar month, and is hot on the heels of the January 1 supermoon.

A full moon is unofficially labelled a supermoon whenever it reaches within 10 percent of its closets distance to Earth – known as its perigee.

A supermoon can appear up to 14 percent larger and 30 percent brighter than on any other night of the year.

Finally in parts of the world where the eclipse will be visible, the full moon will take on a reddish hue according to NASA – the blood moon.

The next lunar eclipse to grace the night skies will arrive on February 11, when the moon passes through Earth’s Penumbra or partial shadow.