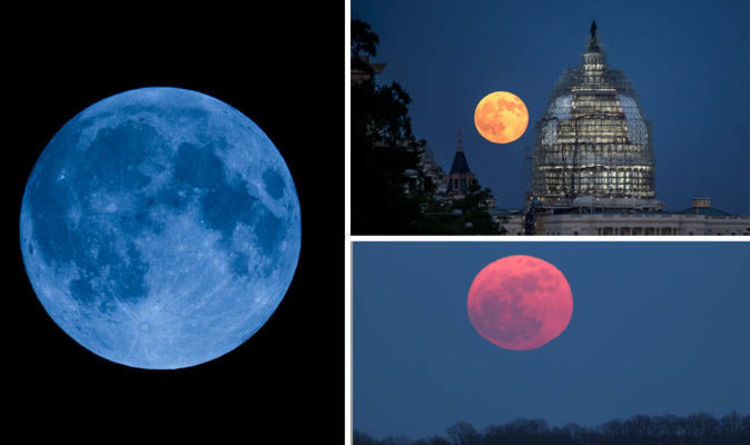 
A blue moon normally occurs once every two years, but in 2018, two blue moons will rise within two months of each other.

What is even more unusual about the January 31 blue moon is that it is coupled with a total lunar eclipse for the first time in more than 150 years.

Tomorrow’s lunar eclipse also marks the end of NASA’s ‘Supermoon Trilogy’ and will take on a reddish hue during the eclipse – hence it is known as the blood moon.

NASA said: “The January 31 full moon is special for three reasons: it’s the third in a series of ‘supermoons’, when the Moon is closer to Earth in its orbit – known as perigee – and about 14 percent brighter than usual.

“It’s also the second full moon of the month, commonly known as a ‘blue moon’.

“The super blue moon will pass through Earth’s shadow to give viewers in the right location a total lunar eclipse.

“While the Moon is in the Earth’s shadow it will take on a reddish tint, known as a ‘blood moon’.”

The super blue moon eclipse is the perfect opportunity for professional photographers and astronomy enthusiasts alike to snap the perfect picture of Earth’s only natural satellite.

Many of these pictures take advantage of the moon’s closer than usual distance to Earth, or use its poignant moonlight to highlight the landscape.

Award wining photographer David Noton said: “The most evocative and genuine use of the moon in landscape portraits results from situations when the light on the moon balances with the twilight in the surrounding sky.

“Such images have a subtle appeal, mood and believability.”

The super blue moon will be visible across the entire globe tomorrow, but only select parts on Earth’s nightside will catch a glimpse of the eclipse.

According to NASA, the eclipse will pass over large swathes of Asia, the Pacific, Australia, Russia and even parts of West North America and Northeast Europe.

If you do not live in any of these zones, find out how to watch the eclipse 2018 live stream online tomorrow.

But the supermoon should be a thrilling spectacle in and of itself, and Royal Observatory Greenwich teased that the full moon could appear up to 14 percent bigger and 30 percent brighter.

This is because the supermoon will approach its perigee, or closest orbital distance to Earth.

The Observatory said: “So long as there’s not too much cloud, the full moon will be an unmistakable white orb in the sky.

“This is a good opportunity to use a small telescope or a pair of binoculars to see the Moon’s detailed surface, or even try taking a few interesting moon photos.”

The super blue moon will be perfectly visible to the naked eye.