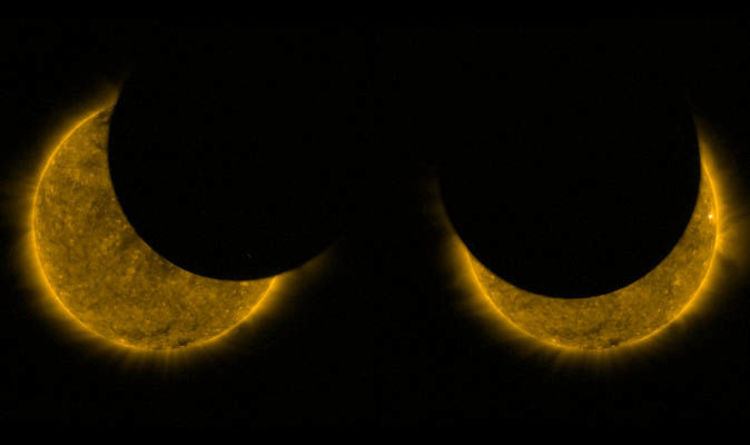 An incredibly fortunate cosmic coincidence means the Moon and the Sun appear to be the same size when observed from the Earth.

This means once or twice every six months or so the two heavenly bodies align in the sky, with the Moon crossing in front of the Sun.

When this happens, we witness a total or partial eclipse of the Sun and it gives the ESA’s satellites an amazing opportunity to snap the phenomenon.

This summer, we witnessed not one but three incredible eclipse events – two of which were partial solar eclipses and one of a total lunar eclipse Blood Moon.

The second of the two partial eclipses was photographed by the ESA’s Sun-watching Proba-2 satellite on the morning of Saturday, August 11.

The ESA said: “Once in a while the Moon slides directly between Earth and the Sun such that it appears to cover our star completely, temporarily blocking out its light and creating a total solar eclipse for those along the narrow path cast by the Moon’s shadow.

“But sometimes the alignment is such that the Moon only partially covers the Sun’s disc.

“Such a partial eclipse occurred on Saturday for observers located primarily in northern and eastern Europe, northern parts of North America, and some northern locations in Asia.”

The first partial eclipse stunned stargazers on the unlucky day of Friday, July 13, passing over the southernmost parts of Australia and New Zealand.

Eclipse visibility was not perfect on Earth but seen from the space the dark disc of the Moon was clearly seen biting into the glowing face of the Sun.

The Moon and the Sun crossed paths again on August 11 but this time over the northernmost parts of the globe in Europe and East and Central Asia.

The ESA’s satellite snapped the pictures in the morning hours of August 11, roughly two hours apart, between 8.40am UT and 10.32am UT.

The eclipse photo clearly demonstrates the way the Moon travels across the face of the Sun during a partial eclipse event.

The picture was taken by the Proba-2 satellite’s SWAP camera which operates at extreme ultraviolet wavelengths.

The ultraviolet camera lets the ESA take incredibly detailed snapshots of the Sun’s corona, its incredibly turbulent and hot atmosphere.

The corona burns at temperatures of about one million degrees and can be seen glowing around the disc of the Sun in the picture. 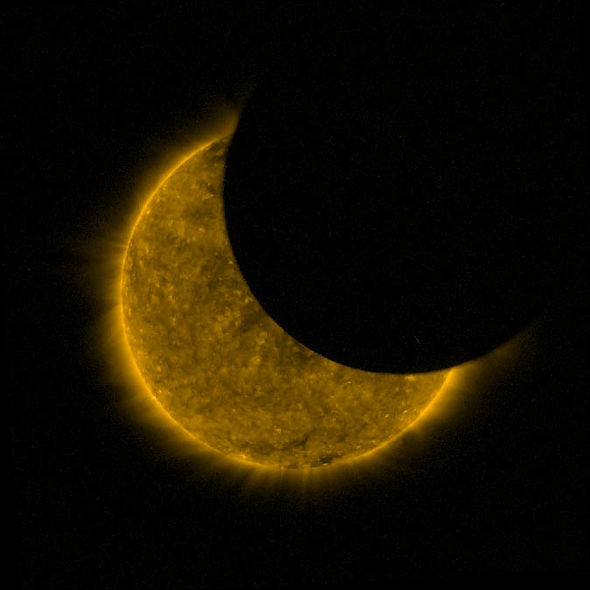 Eclipse 2018: The eclipse photo was taken on the morning of Saturday, August 11 (Image: ESA/ROYAL OBSERVATORY OF BELGIUM) 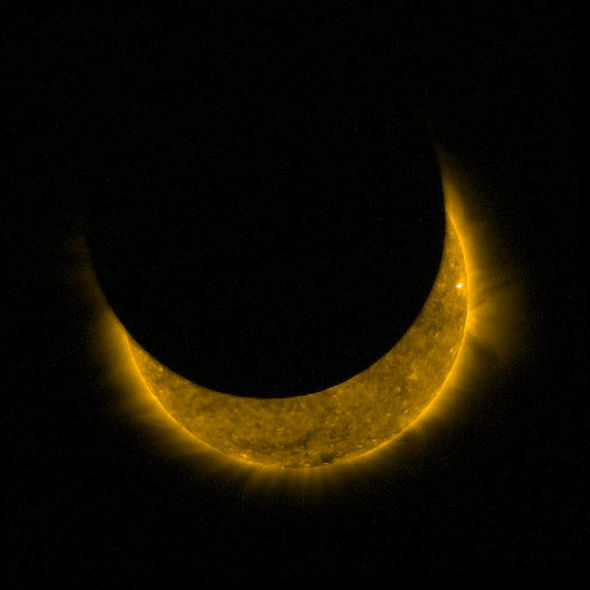 Eclipse 2018: You can see the dark disc of the Moon passing in front of the Sun (Image: ESA/ROYAL OBSERVATORY OF BELGIUM)

The Proba-2 satellite orbits the sun roughly 14.5 times a day, constantly changing the angle at which it views space.

During the August eclipse, the satellites dipped in and out of the Moon’s eclipsed shadow twice.

In addition to the partial solar eclipses, the ESA also shared a stunning photo of the brilliant Blood Moon eclipse on Friday, July 27.

The ESA said: “This unusual view of the Moon was captured during Friday’s total lunar eclipse from ESA’s European Space Astronomy Centre near Madrid in Spain, at 23:03 CEST. 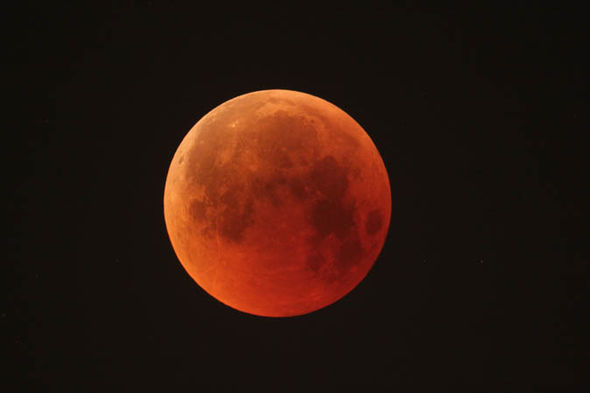 “The unprocessed image was taken with a Canon EOS 550D attached to a 20cm aperture Celestron Newtonian CG8, with an exposure time of one second – ISO 1600.”

During the total lunar eclipse, refracted sunlight in the Earth’s atmosphere painted the Sun’s surface a deep blood-red colour.

The ESA said lunar eclipses can occur up to five times a year so there is plenty of opportunity to see another one in the wild.

The next Blood Moon eclipse will peak in the Western Hemisphere on the night of January 20 to January 21, 2019.

We Just Got Our Closest View of Europa in 20 Years, And We Can’t Stop Staring : ScienceAlert
Experts Estimate The Scale of The Nord Stream Pipelines Methane Leak : ScienceAlert
Diamond From 660 Kilometers Below Earth’s Surface Reveals a Water-Rich Environment : ScienceAlert
Ancient Maya Cities Appear to Have Been Riddled With Mercury Pollution : ScienceAlert
A Rare Condition Makes Hair Truly Untamable, All Thanks to These Genes : ScienceAlert