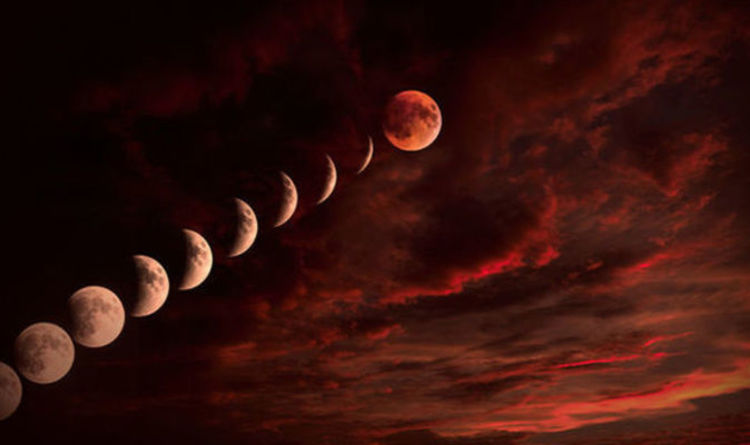 
The rare juxtaposition will have astronomers and stargazers gawking into the night, with the astrological event unlikely to be matched for many years.

The astronomical sight will see the lunar eclipse take place for one hour and 43 minutes, while Mars will be brighter than usual, as a result of being so near to the earth’s surface.

Deputy Director of the Royal Astronomical Society, Robert Massey, told The Times: “It is a beautiful sight and one that reminds us we have souls; to take a moment to look at the sky.

“You’ll have two bright objects of such huge public interest … it’s a great chance for photographers.

“It will be viewed best – and for longest – from south east Europe but in south east England, it should still last an hour and 23 minutes beginning at 8.49pm.

“It will be higher in the sky. In America, you won’t see it at all.

“If you’re going to eastern or southern Europe, you’ll get a better view.”

The best areas to see the blood moon are eastern Africa, central Asia and the Middle East.

Those in Europe are most likely to see a partial lunar eclipse.

The blood moon was given its name due to the red and orange hue that it shows during the eclipse.

The moon has no atmosphere to refract sunlight and create colours, so the red colour comes from another source.

Stargazers in the UK will be able to watch the rare phenomenon from 8.30pm BST.

Amazing New Fossils Provide Earliest Known Traces of The Evolution of Our Jaws And Limbs : ScienceAlert
Biology Inspires a New Kind of Water-Based Circuit That Could Transform Computing : ScienceAlert
These Are The Most Distant Star Clusters Ever Seen, And We Nearly Missed Them : ScienceAlert
Long COVID Is Still Raising More Questions Than Answers, Say Researchers : ScienceAlert
Ancient Burial of a Young Girl Shows How We Carried Our Babies 10,000 Years Ago : ScienceAlert