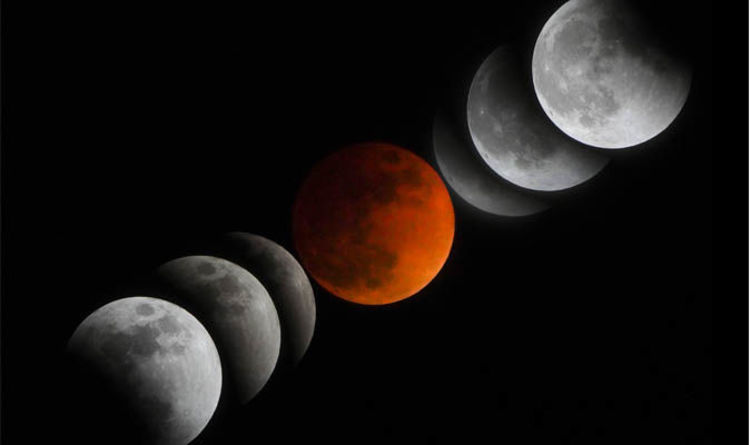 
Next week stargazers will look up to the night skies to see the July full moon glow a deep red to orange colour.

The so-called Blood Moon will appear in the afternoon hours of Friday, July 25 during the total lunar eclipse.

The lunar eclipse is the second of two this year and comes hot on the heels of the January 31 Super Blue Blood Moon.

Clocking in at one hour and 43 minutes, astronomers are touting this Blood Moon eclipse as the longest one of the 21st century.

When is the July Blood Moon total lunar eclipse?

The entire eclipse from start to finish will take place between Friday, July 28 and Saturday, July 28.

The eclipse will start at once everywhere on the nightside of the Earth but depending on where you live you will see it a different times.

Over the UK the eclipse will begin below the horizon and peak out at moonrise sometime after 8.30pm BST.

Stargazers in London will see the eclipsed Blood Moon from 8.50pm and up north in Glasgow the moon will rise after 9.20pm BST.

By about 12.30am on Saturday the eclipse will wrap up and the moon will return to its characteristic white glow.

Where is the July Blood Moon eclipse visible next week?

The moon’s path of totality or maximum eclipse will only pass over a portion of the Eastern Hemisphere.

Swathes of Central Asia and Eastern Africa, including India, Pakistan, South Africa and Madagascar, are best primed to see the eclipse from start to finish.

This means these parts of the world will see the penumbral, partial and total phase of the eclipse, lasting around three hours and 55 minutes in total.

Countries outside of this optimal zone, such as the UK, will only see the eclipse at moonrise on Friday or sunrise on Saturday morning.

Unfortunately for astronomy enthusiasts in Northern America, the whole of the US, Canada, Mexico and Central America are completely outside of the eclipse’s path.

Stargazers in South America will catch a glimpse of the eclipse around moonrise local time.

How to see the July Blood Moon total lunar eclipse?

The good news is unlike a total solar eclipse, a Blood Moon eclipse is completely safe to look at without any special equipment.

Dr Helen Klus, an astronomer at the Royal Astronomical Society, exclusively gave Express.co.uk some tips and advice on viewing the Blood Moon.

She said: “If you’re an amateur astronomer we would say amateur astronomy is brilliant because you don’t need anything. You can just go out by yourself and look up without any expensive equipment.

“If you are quite new to this you don’t need to spend a lot of money, or any money really, but if you wanted to you could buy a pair of binoculars.

“You will be fine without a telescope because the eclipse will be visible to the naked eye.

“If you are interested in this sort of thing we would recommend you contact your local astronomy group because they usually will give you advice in person.”

The expert said the moon will rise over the horizon in the southeastern skies with the additional bonus of Saturn, Jupiter and Mars all within a close proximity of the moon.

If you decide to catch a glimpse of the Blood Moon in person, Dr Klus suggests you find a comfortable spot with an unobstructed and clear view of the southeastern horizon.

Just be aware of light pollution if you live in a bigger city and cloud cover on the night could be another hindering factor.

How to watch the Blood Moon live stream online?

In case you would rather watch the Blood Moon from the comfort of your home, there is a number of options to watch the lunar eclipse live online.

A Royal Observatory Greenwich spokeswoman told Express.co.uk the observatory will live stream the eclipse with commentary from its astronomers.

The Blood Moon live stream will be hosted on the official Observatory Facebook page on July 27.

Or you could watch the eclipse on YouTube via the Time and Date broadcast from locations in Greece, South Africa and Australia.

Bitcoin’s Climate Impact Is Bigger Than Beef Farming – And It’s Only Getting Worse : ScienceAlert
Long COVID Is Still Raising More Questions Than Answers, Say Researchers : ScienceAlert
Ancient Burial of a Young Girl Shows How We Carried Our Babies 10,000 Years Ago : ScienceAlert
It Turns Out There Is Such a Thing as Good Gossip, According to New Research : ScienceAlert
A Rare Condition Makes Hair Truly Untamable, All Thanks to These Genes : ScienceAlert