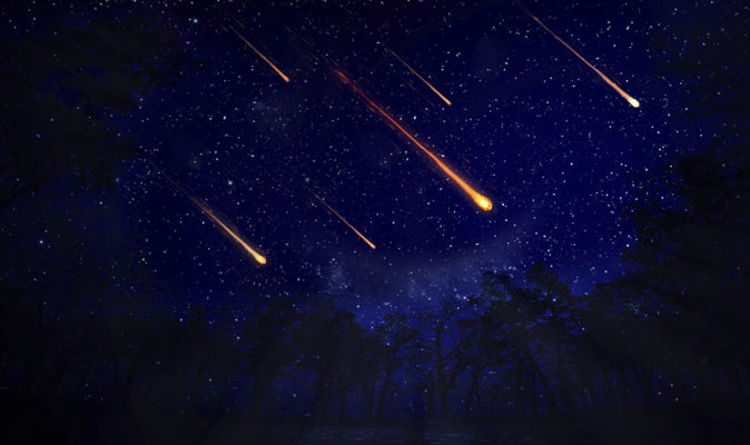 The company revealed the first show will take place over Japan in 2020, but after that private companies and governments will be able to put on a meteor shower anywhere and anytime.

They will also be able to produce different colours.

ALE says on its website: “We aim to produce artificial shooting stars by projecting particles, made out of special materials, from orbiting micro-satellites.

“When the particles re-enter the earth’s atmosphere, they burn through a process known as plasma emission, creating the appearance of shooting stars on the ground.”

The first satellite is to be launched on a rocket being launched by Japan’s space agency by March next year, while the second micro-satellite will be ferried a few months later on a private-sector rocket.

Both satellites will have enough pellets for 20 to 30 events, ALE said, and if skies are clear enough, each show could be seen over a 124 mile range.

ALE chief engineer Ko Kamachi said: “We are planning to push a used satellite into the atmosphere on a targeted orbit to create a giant artificial shooting star.”

It is unclear much ALE is going to charge people or organisations for an artificial meteor shower, but chief executive Lena Okajima hopes to make it accessible to the entire world.

She said: “We are targeting the whole world, as our stockpile of shooting stars will be in space and can be delivered across the world.”

Not only will the show be spectacular, but the company says it will help scientists learn more about natural meteors.

Its website reads: “By studying the path of artificial shooting stars where the angle of incidence, velocity and materials are known, we hope to be able to better understand the mechanics of naturally occurring shooting stars and meteorites.

“The upper atmosphere where our shooting star particles will burn has few means of observation currently and remains one of the least understood portions of the atmosphere.

“The data collected via this project will be useful for predicting the path of satellites and artificial objects as they re-enter the Earth’s atmosphere.

“This has potential applications in the safe disposal of space debris.”

A Rare Condition Makes Hair Truly Untamable, All Thanks to These Genes : ScienceAlert
Control of a 6-Qubit Processor in Silicon : ScienceAlert
New Discovery Means Parkinson’s Could Be Diagnosed With a Swab in Just 3 Minutes : ScienceAlert
Hubble And Webb Pics Reveal DART Impact Was Even Bigger Than Expected : ScienceAlert
Shimmering ‘Lakes’ Under The South Pole of Mars Might Be Something Else Entirely : ScienceAlert