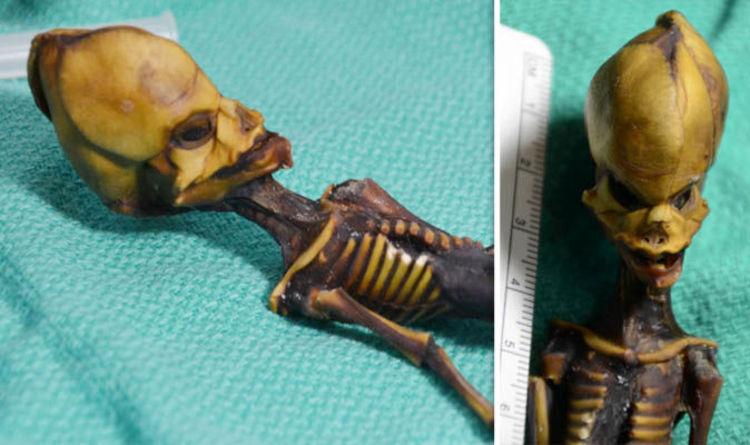 
The Atacama mummy, nicknamed endearingly Ata, was discovered 15-years-ago in a deserted Chilean town in the Atacama Desert.

The six-inch-long mummy stunned the scientific community due to its minuscule proportions, missing ribcage and deformed skeletal features.

UFOlogists around the world instantly claimed the skeleton was of extraterrestrial origin and it featured in a high profile documentary.

But a 2013 study led by researchers at Stanford University in the US carried out genomic testing to determine Ata was once a young girl who suffered genetic abnormalities.

The findings were published earlier this year in March in the science journal Genome Research.

Study co-author Atul Butte said at the time: “It is quite surprising how many mutations this child has.”

However four months later the Stanford study came under fire by scientists from the University of Otago, New Zealand.

A team of international researches led by associate professor Sian Halcrow claimed this week to have found a number of concerns surrounding the skeletal and genomic testing carried out on Ata.

Dr Halcrow and her team said in the International Journal of Paleopathology there was no evidence for the genomic abnormalities presented by Stanford.

Instead the Otago-based researchers argued the proposed abnormal characteristics are all part of the normal skeletal development of a foetus.

Professor Halcrow wrote: “There is an ethical question of whether the ends justify the means; that is, whether a study undertaken without appropriate ethical or legal considerations substantially addressed an important anthropological, medical, or genomics research question.

“We have shown that there is nothing to suggest that Ata had any skeletal abnormalities.

“On the basis of incorrectly perceived phenotypic anomalies and an incorrect age-at-death estimate, Nolan and colleagues undertook a DNA analysis in 2013 and unsurprisingly confirmed the mummy was human.”

The expert added the situation proves the need for more interdisciplinary research to be carried out in such case studies.

She said: “A nuanced understanding of skeletal biological processes and cultural context is essential for accurate scientific interpretation and for acting as a check on the ethics and legality of such research.”

Kristina Killgrove, co-author of the Otago paper, said the Stanford study may have crossed a number of ethical lines by not involving a biological anthropologist in the study and the potential illegal removal of the mummy from Chile.

It is unclear just how old the mummified remains are with estimates ranging from under 500-years-old to just a few decades of age.

But the Otago researchers claimed regardless of the skeleton’s age, the body was protected under Chilean legislation regarding archeological findings and National Monuments from 1970.

The specific DNA genome sequencing undertaken by Stanford required the destruction of some of the mummy’s bones which Dr Halcrow and her team claimed was unethical and potentially illegal.

In the paper, the scientists concluded: “Unfortunately, there was no scientific rationale to undertake genomic analyses of Ata because the skeleton is normal, the identified genetic mutations are possibly coincidental, and none of them are known to be strongly associated with skeletal dysplasias that would affect the phenotype at this young age.

“We caution DNA researchers about getting involved in cases that lack clear context and legality, or where the remains have resided in private collections.

“In the case of Ata, costly and time-consuming scientific testing using whole genome techniques was unnecessary and unethical.”

We Have Our First Look at Neptune’s Rings in 33 Years, And They’re Glorious : ScienceAlert
One of The World’s Largest Organisms Is Disintegrating. Here’s How We Might Save It. : ScienceAlert
Why House Fly Barf Is an Overlooked Potential Vector of Disease : ScienceAlert
There’s Trouble Bubbling Up in Newly Formed Alaskan Lakes, And Scientists Are Worried : ScienceAlert
A Robot on Mars Detected The Tremors of Meteorites Hitting The Red Planet : ScienceAlert