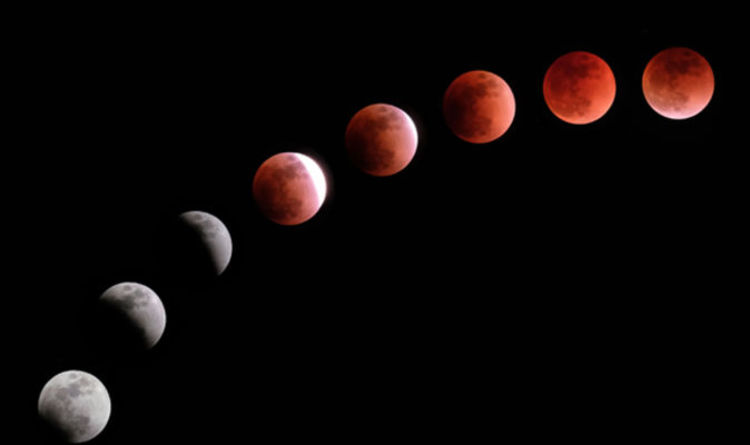 
The longest blood moon of the century with arrive tonight and experts are revealing how it will play out.

The eclipse is composed of three distinct phases – the penumbral eclipse, the partial eclipse, and total eclipse.

To begin with, the moon will have a light shadow placed over it as the Earth begins to block out the sun’s light – this is the penumbral eclipse.

A partial eclipse will then begin where large parts of the moon are blacked out by the Earth’s shadow.

The total eclipse will then begin where the moon is completely blacked out by the Earth’s shadow.

When the moon begins to emerge from the Earth’s shadow, this is when the blood moon will occur.

This is because the light from the sun is being bent when it passes through the Earth’s atmosphere.

The west of Britain will be the best place to view the longest Blood Moon of the century, meteorologists have revealed.

While the whole of the UK will be able to view the lunar phenomenon, parts of western Britain will be the astrological hotspots for the Blood Moon.

Gower Peninsula in Wales, the Isles of Scilly and Cornwall have been tipped as the best place to watch the longest Blood Moon of the 21st century, which expected to last for a total of one hour and 43 minutes this coming Friday.

Dr Helen Klus, an astronomer with the Royal Astronomical Society, explained to Express.co.uk when the Blood Moon will rise for UK stargazers.

She said: “Look at the horizon in the southeast on July 27.

“About 8.50pm BST the moon will start rising in London and it’s 9.26pm BST if you are in Glasgow.

“It will be about an hour for the maximum eclipse which is about 9.21pm BST if you are in London and then there will be another half-hour or so before the eclipse ends.”

Does IQ Decline as We Age? One Type of Intelligence Peaks in Your Twenties : ScienceAlert
Wolves Really Can Become Attached to Humans Like Dogs Can, Adorable Study Finds : ScienceAlert
One of The World’s Largest Organisms Is Disintegrating. Here’s How We Might Save It. : ScienceAlert
We Have Our First Look at Neptune’s Rings in 33 Years, And They’re Glorious : ScienceAlert
A Stunning New 3D Model of The Cat’s Eye Nebula May Help Us Solve Its Mysteries : ScienceAlert