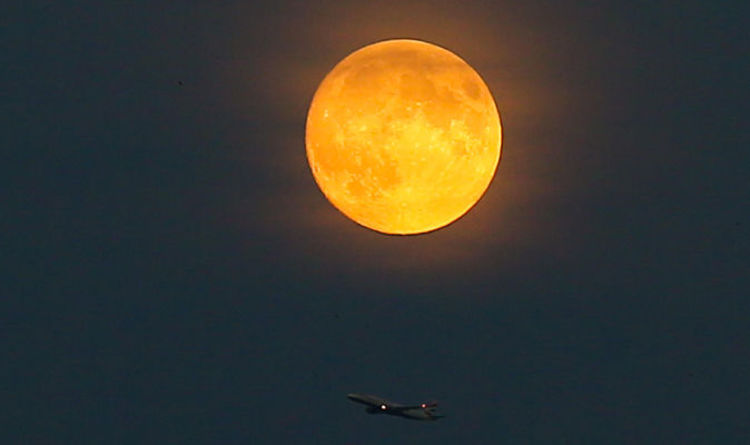 
The Blood Moon will be the UK’s first chance to see a major eclipse this year, and according to NASA’s Moon experts at the Goddard Space Centre, the eclipse will last around one hour and 43 minutes.

It will appear today on the nightside of Earth in the late afternoon to evening hours.

It is expected to turn fully red from roughly 5.30am.

But the effects of the stunning astronomical event are already visible, and a British Airways plane has been pictured with the glowing shades of the celestial body in the background on Thursday evening.

In the images, taken in North London, the moon has left behind all its greyness and embraced the warmer tones caused by the total lunar eclipse.

The celestial body appears so close to Earth that the lunar craters can be seen with the naked eye.

The reason behind the moon’s scarlet colour is a phenomenon named “rayleigh scattering” which sees the sun’s rays refracted through the earth’s atmosphere producing a red moon.

According to Professor Mark Birkinshaw, from the University of Bristol, the only two things people need tomorrow night to see the stunning astronomical event are your own eyes.

“If you have some low powered binoculars you should be able to see the usual lunar features, just in a slightly different set of colours.”

Mr Birkinshaw added: “To look for the Moon you would have to face the direction directly opposite the sun.

“If the sun has been quite high in the sky as it has been in the summer then you would be looking at the Moon fairly low down towards the horizon.

“Reasonably high in the southeastern sky is probably the direction to look.”

The next solar eclipse will appear on the night of January 21, 2019, and will be seen from the US and UK.

3 Major Aquatic Animal Groups Can Trace Their Lineage to This Ancient Armored ‘Worm’ : ScienceAlert
Narwhals Are So Weird, Scientists Used Chaos Theory to Explain Their Behavior : ScienceAlert
These Are The Most Distant Star Clusters Ever Seen, And We Nearly Missed Them : ScienceAlert
It Turns Out There Is Such a Thing as Good Gossip, According to New Research : ScienceAlert
Amazing New Fossils Provide Earliest Known Traces of The Evolution of Our Jaws And Limbs : ScienceAlert