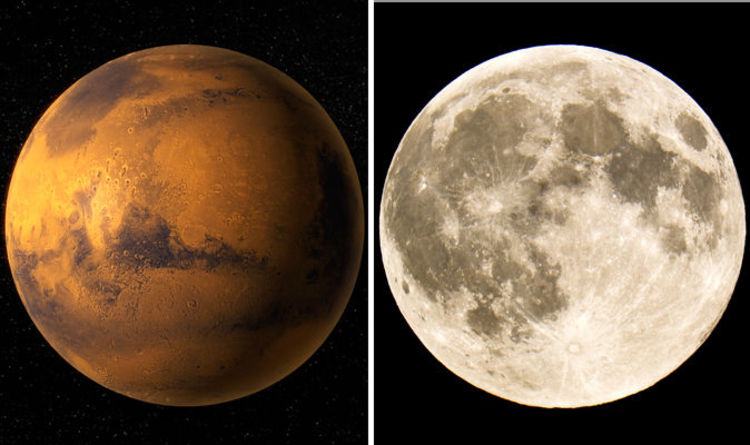 
The Earth’s moon will be passing through the centre of Earth’s massive shadow for nearly two hours tonight, which will be the longest total lunar eclipse of the century.

And because of the biennial alignment of Earth and Mars’ orbits around the sun on July 31, Mars will make its closest approach to Earth since 2003.

But a viral hoax article is claiming the red planet, despite being 35.8million miles away, will suddenly appear a thousand times larger in sky.

NASA said in a recent blog: “Don’t be fooled by the Mars hoax.

“The message is that Mars will look as big as the moon in our night sky.

“If that were true, we’d be in big trouble, given the gravitational pulls on Earth, Mars and our moon!”

If Mars was closer to Earth there would be severely higher tides on Earth.

There would also be a drastically warmer Martian climate and perhaps the removal of both planets’ moons from their orbits.

But what we can actually expect to see Mars rising in the east.

Over the coming nights, Mars will glow brighter and brighter in the night sky as the planet makes its approach to Earth on July 31.

It will finally come within a mere 35.8 million miles.

Although it is still far away, it is a lot closer than the average distance between the two worlds, which is 140 million miles.

Mars will be visible to the naked eye as a red sparkle in the sky.

But it will be 10 times brighter than it was a few months ago, but not as bright as Venus.

With a telescope you may be able to see some of the planets details, such as its polar caps.

This was the closest the two planets had been in almost 60,000 years.

Incidentally, it was also the first year the Mars hoax emails went around.

We Just Got Our Closest View of Europa in 20 Years, And We Can’t Stop Staring : ScienceAlert
Bitcoin’s Climate Impact Is Bigger Than Beef Farming – And It’s Only Getting Worse : ScienceAlert
It Turns Out There Is Such a Thing as Good Gossip, According to New Research : ScienceAlert
3 Major Aquatic Animal Groups Can Trace Their Lineage to This Ancient Armored ‘Worm’ : ScienceAlert
A Rare Condition Makes Hair Truly Untamable, All Thanks to These Genes : ScienceAlert