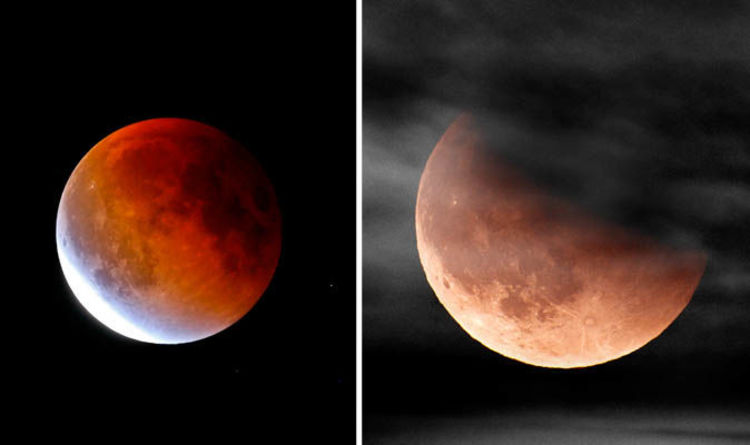 
On the evening of Friday, July 27, the full moon will pass through the centre of the Earth’s shadow and change colour.

The total lunar eclipse will be visible throughout the entire UK but the exact moment the Blood Moon appears at night will vary from city to city.

The moment the moon passes into the shadow will happen below the horizon but it will look redder once it peaks at moonrise in the southeast skies.

Dr Klus said: “Look at the horizon in the southeast on July 27.

“About 8.50pm BST the moon will start rising in London and it’s 9.26pm BST if you are in Glasgow.

“It will be about an hour for the maximum eclipse which is about 9.21pm BST if you are in London and then there will be another half-hour or so before the eclipse ends.”

In those parts of the world where the entire eclipse is visible, namely Central Asia and Eastern Africa, the eclipse will last one hour and 43 minutes.

Astronomers are touting this lunar eclipse as the longest of the 21st century – nearly 30 minutes longer than the Super Blue Blood Moon on January 31, 2018.

Additional penumbral and partial eclipsing before and after maximum eclipse will see stellar the spectacle last around three hours and 55 minutes.

Dr Klus said: “Once the total eclipse ends the redness will go away because the moon will be in the less dark part of the Earth’s shadow.

“There will be a little bit of actual sunlight on the moon and that will drown out any of the red light.

“The whole eclipse, including the partial shadow, will end about 12.30am BST.”

The total lunar eclipse is colloquially referred to as the Blood Moon because of the way refracted sunlight paints the moon red.

When the moon is completely shrouded in the shadow cast by the sun and the Earth, any light hitting the stellar body is bent and scattered around the atmosphere.

The effect is known as Rayleigh Scattering and Dr Klus said it is the very same effect which causes sunsets to look redder.

She said: “The moon is going to look redder than normal so you see what you would call a Blood Moon because the light come through the atmosphere.”

Deep Brain Simulation Could Alleviate OCD When Other Treatments Have Failed : ScienceAlert
Secret Clues in Tutankhamun’s Tomb Reignite The Idea That Nefertiti Is Hidden Nearby : ScienceAlert
Bitcoin’s Climate Impact Is Bigger Than Beef Farming – And It’s Only Getting Worse : ScienceAlert
Ancient Burial of a Young Girl Shows How We Carried Our Babies 10,000 Years Ago : ScienceAlert
New Discovery Means Parkinson’s Could Be Diagnosed With a Swab in Just 3 Minutes : ScienceAlert