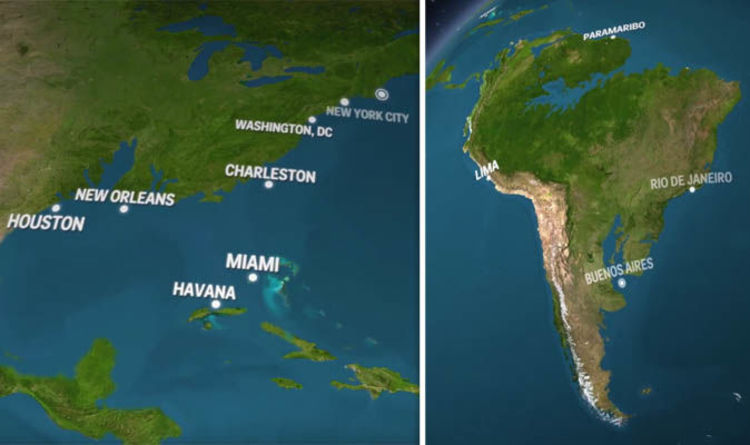 
The incessant burning of fossil fuels and production of greenhouse gases could see global sea levels rise by up to 216 feet, according to National Geographic.

The water released by the melting ice caps would be enough to completely submerge the cities of London, Venice, Barcelona and Brussels in Europe alone.

The coastal areas most at risk were charted out by Business Insider in an animated map based on data collected by National Geographic.

The entire USA eastern seaboard and Florida would disappear underwater with additional cities lost on the West Coast.

Further down in South America large swathes of Argentina would cease to exist alongside Uruguay, Paraguay and parts of northern Brazil.

The areas most at risk would become completely inhospitable if the apocalyptic climate change scenario comes to pass.

According to the National Snow and Ice Data Center (NSIDC) about 10 percent Earth is covered in ice.

The ice covers 5.8 million square miles, including the glaciers, ice caps and ice sheets of Antarctica and Greenland.

About 75 percent of the world’s fresh water is stored in the glaciers.

The news comes after the Antarctic’s Larsen C and George VI ice shelves were found to be at risk of collapsing.

If the giant chunks of ice were to break off, the sea levels could potentially rise by another inch.

Global sea levels have risen by almost seven inches over the past 100 years alone, the USA space agency warned.

A study published by the UK National Oceanographic Centre (NOC) earlier in July warned the threat of rising sea levels could cost the world economy £10trillion ($14trillion) a year in flood damage by the year 2,100.

The study argued disregarding the United Nation’s (UN) climate goals could have catastrophic consequences over time.

The climate expert warned melting ice caps and rising sea levels are “one of the most damaging aspects of our warming climate.”

The UN, through the Paris Agreement, is firmly committed to keeping global temperatures from rising by 2C by the end of the 21st century.

Current prediction models suggest the planet is headed towards a 3C increase in temperatures this century.

This Is How Much Fossil Fuel The World Is Sitting on, And It’s a Time Bomb : ScienceAlert
Does IQ Decline as We Age? One Type of Intelligence Peaks in Your Twenties : ScienceAlert
There Are New FDA Safety Warnings About Breast Implants. Here’s What We Know : ScienceAlert
Early Puberty in Girls Surged in The Pandemic, And We May Finally Know Why : ScienceAlert
Scientists Are About to Fire Up The Most Powerful Laser in The US : ScienceAlert