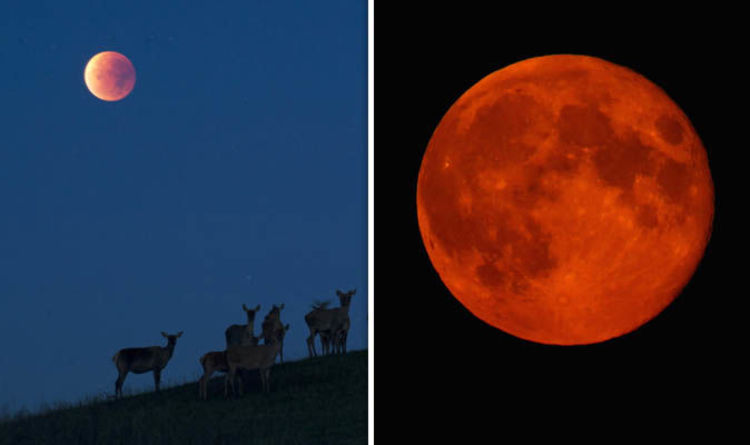 
The best places to watch the Super Blue Blood Moon will be those living in the western hemisphere – the eclipse begins at 5.51am EST (10.51am GMT).

The total lunar eclipse, when the moon glows red from passing into the direct shadow of the Earth begins at 7.52am EST (12.52pm GMT) on Wednesday January 31 and will last for one hour and 16 minutes.

Not every place on Earth will experience the Blue Moon this month, as the second full moon of January will not appear in some places until February 1, such as regions in eastern Asia, eastern Australia and the UK.

However what will make this supermoon special is the fact there will be a lunar eclipse on Wednesday January 31 to make the blue moon a ‘super blue blood moon.’

The lunar eclipse will only be visible on Earth’s night side.

The best place to view the Super Blue Blood Moon will be the western part of North America, Alaska and the Hawaiian islands.

In Los Angeles, California, the total lunar eclipse will be visible for four hours and five minutes, it will begin at 4.51am local time and end at 5.29am, totality will end at 6.07am and the moon will emerge from the umbra at 7.11am.

Those living in Hawaii and Alaska will be able to view the entire lunar eclipse from beginning to end, as it will occur earlier in the night.

However those in the eastern US, will only be treated to a partial lunar eclipse as it happens close to the time of the moon setting, but the skies will be clear for the event.

Those living in the major cities of New York City, Washington, Raleigh, North Carolina and Atlanta will not have to worry about cloud blocking the lunar spectacle.

Conditions in Hilo will be better than Honolulu as cloud and showers will dominate the western Hawaiian islands.

Most of Alaska, including Anchorage, will be clear during the eclipse but endure frigid air.

For those living in the Middle East, Asia, eastern Russia, Australia and New Zealand the super blue blood moon will be visible during moonrise in the evening of Wednesday January 31.

One astronomer said the eclipse is going to be “lovely and long” – especially in the eastern states of Australia.

Tanya Hill of the Melbourne Planetarium said: “This one is going almost right into the centre of the Earth’s shadow, so it will be lovely and long.

“Slowly you’ll see that shadow move across the Moon until it completely engulfs it. That’s when we have the beautiful colour of totality forming.”

Dr Gregory Brown, from the Royal Observatory Greenwich, said the full spectacle will “definitely not be visible from the UK, not even a partial eclipse”.

But he said the optimum time to view the UK’s super blue moon will be around 12.40am, when the moon is at its highest.

A New FRB Signal Has Buzzed Nearly 2,000 Times in Just Two Months, Raising a Mystery : ScienceAlert
Wolves Really Can Become Attached to Humans Like Dogs Can, Adorable Study Finds : ScienceAlert
Shimmering ‘Lakes’ Under The South Pole of Mars Might Be Something Else Entirely : ScienceAlert
Still Short of Breath? Here Are 3 Ways COVID-19 Can Damage Lungs Long Term : ScienceAlert
We Just Got Our Closest View of Europa in 20 Years, And We Can’t Stop Staring : ScienceAlert