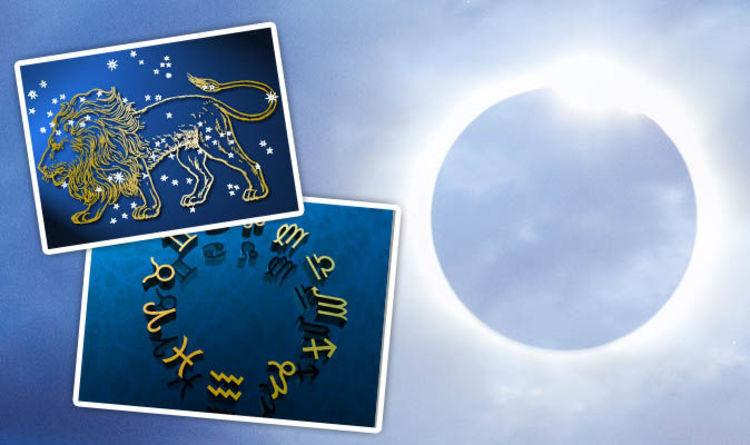 
The August New Moon will pass in front of the glowing face of the Sun in the Northern Hemisphere on Saturday, August 11.

The partial solar eclipse comes off the back of the July 27, Blood Moon lunar eclipse and another partial eclipse on July 13.

Overall, the August eclipse of the Sun is the fifth eclipse event of the year and astrology enthusiasts are already counting down the days.

While those who believe the movements of the stars, the Sun and the Moon have an impact on our lives also think the eclipse will usher in a time of intense change.

Astrologer Pam Gregory said the August eclipse in Leo will top off a “very powerful eclipse period” this summer.

She said: “We’re in a period of intense energy and I’m sure you feel that yourselves. Many of you may have felt an energy wipeout at the total lunar eclipse.

“I certainly did and it’s something that many of us are sensitive to – those big peaks of the Moon’s cycle.

“So it’s intense for many reasons. We have unusually three eclipses in this eclipse season as opposed to the normal two, we have two in July and we’re going to have this additional solar eclipse in Leo in August.

“But we have a lot of other aspects as well that make this period so powerful. It’s a very fast moving period of change.”

Fellow astrologer Barbara Goldsmith thinks the alignment of the Sun and the Moon with six planets in fixed signs, may challenge our ability to embrace change this month.

She encouraged people to let go of anything that does not serve their greater good and accept change.

Mrs Goldsmith said: “On August 11 we have a solar eclipse at 18 degrees and 41 minutes of Leo, making this the last of a series three eclipses we’ve had over this last month.

“So during this eclipse, we have six planets in fixed signs and this is going to be an opportunity for you to see where you are rigid, to see where you have a set expectation, a set routine where it’s not serving you.

“Because when you really have predictability in your life, after a while it does often get boring. It’s like having that nine to five job, and going to that same office and doing similar things everyday.”

The astrologer argued the New Moon solar eclipse is the perfect opportunity to “move things” and embrace more joy in our lives.

The solar eclipse will peak on the dayside of Earth next week in the morning hours, around 10.46 UK time.

The eclipse will be mainly visible from the uppermost parts of the Northern Hemisphere but astrologers believe your location during the eclipse is irrelevant to receive its energies.

Astrologer Kari Samuels said: “The theme of this month is all about light and stepping into a new light in your life and the Sun, so there’s a lot of breakthrough consciousness that’s happening right now.

“This is kind of the last real spiritually and emotionally intense month because we’re still in eclipse season – we are experiencing our third eclipse this month – three in a row.

Weight Lifting in Old Age Does More Than Just Keep Your Muscles Strong : ScienceAlert
Hubble And Webb Pics Reveal DART Impact Was Even Bigger Than Expected : ScienceAlert
‘Unbelievable’ Video Shows 2 Bees Working Together to Open a Soda Bottle : ScienceAlert
We Just Got Our Closest View of Europa in 20 Years, And We Can’t Stop Staring : ScienceAlert
Superconductivity Model With 100,000 Equations Now Contains Just 4 Thanks to AI : ScienceAlert