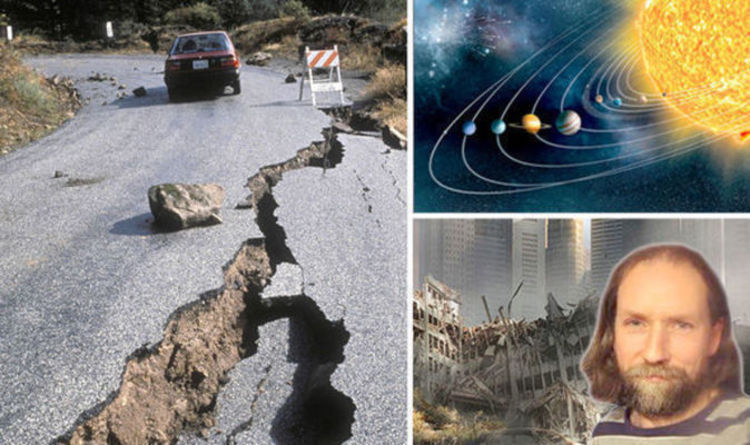 
The Netherlands based Frank Hoogerbeets, who uses astrology to warn of disasters, has issued an online warning about what he sees as the risk of a major earthquake in February or March.

In a YouTube video Mr Hoogerbeets says the disaster will be sparked by a rare planetary alignment which will take place from between February 21 to March 7.

He told Express.co.uk: “In this time-frame a rare planetary geometry will cause a significant seismic increase, with probably one or two magnitude 7.8 earthquakes at least.

“But there is definitely the potential for a mega-thrust earthquake with magnitude 8 or even 9.”

Mainstream scientists have rubbished his claims, yet he continues to issue his warnings with mixed successes.

Mr Hoogerbeets said three planetary alignments will converge on February 21 “which will cause a seismic increase from the 21st to the 24th”.

He added a further three planetary alignments on February 25 “will continue increased seismic activity from the 25th to the 28th”.

Mr Hoogerbeets warned that around March 4 there were “no less than six planetary alignments converging.”

He said: “This is very rare and it almost never occurs. What makes it particularly unique is the quadruple alignment on that day with Mercury, the Sun, Mars and Jupiter, accounting for four of the six alignments. It makes March 5 a candidate for large seismic activity.

“With these multiple convergences this time-frame is more powerful than any other I’ve seen in the last three years.”

But Mr Hoogerbeets has made several predictions with distinctly mixed results.

There have been significant quakes after some of his warnings, but he is no longer specific about where they will strike or the exact day.

There was also the much publicised mega quake he warned was about to hit California in May 2015 – but it too never arrived.

However, this time he was specific about an area.

He said: “The Cascadia subduction zone comes to mind, as it is the only subduction area in the world that has not experienced a mega-thrust earthquake in recent decades.”

Scientists agree the Cascadia subduction zone is long overdue a mega quake, but they do not agree with Mr Hoogerbeets prediction techniques.

Mr Hoogerbeets added: “This is a timely warning so that everyone has a chance to prepare.

“There is no way to know exactly where larger earthquake will occur.

“But at least one or two big tremors are expected.”