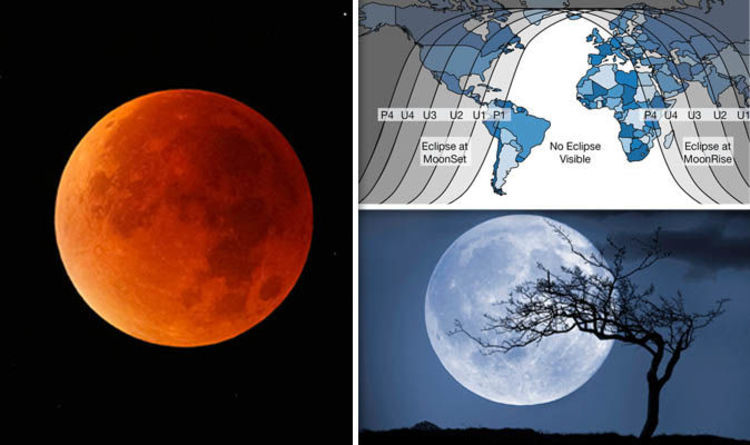 
For the first time in 150 years, a blue moon total lunar eclipse will be visible across the USA this week.

The celestial phenomenon, which occurs on Wednesday January 31, will combine three separate lunar spectacles – a blue moon, a supermoon and a total lunar eclipse.

Lunar eclipses are often dubbed ‘blood moons’ because of the way the moon glows with a reddish hue, while a blue moon occurs when two full moons rise in the same calendar month.

The event marks the final instalment in NASA’s so-called ’Supermoon Trilogy’  the first of which rose at the start of December 2017.

Read more: HOW RARE IS THE SUPER BLUE BLOOD MOON 2018?

Where can you see the blue moon lunar eclipse in the USA?

NASA scientists have said the eclipse will be best viewed in western parts of the USA.

Gordon Johnston, NASA program executive and lunar blogger, said: “For the continental US, the viewing will be best in the west. Set your alarm early and go out and take a look.”

He added that it will be more difficult, but not impossible, to view the eclipse on the east coast due to the time difference.

He said: “Weather permitting, the west coast, Alaska and Hawaii will have a spectacular view of totality from start to finish.”

“Unfortunately, eclipse viewing will be more challenging in the eastern time zone. The eclipse begins at 5:51 AM ET, as the moon is about to set in the western sky, and the sky is getting lighter in the east.”

Those in the east are advised to get an early start and travel to a high up location.

Mr Johnston said: “Your best opportunity if you live in the east is to head outside about 6.45am and get to a high place to watch the start of the eclipse.

The NASA map above shows where in the US, skywatchers are likely to get the best views.

What time is the super blue blood moon in the USA?

According to NASA, spectators in California up to western Canada will be treated to the eclipse in its entirety.

The umbral eclipse – where the moon starts moving into the Earth’s shadow -begins at 3.48am PT, with totality getting underway at 4.51am.

Totality will last more than an hour, ending at 6.05am.

The NASA map above shows what time each stage of the eclipse starts in different time zones.