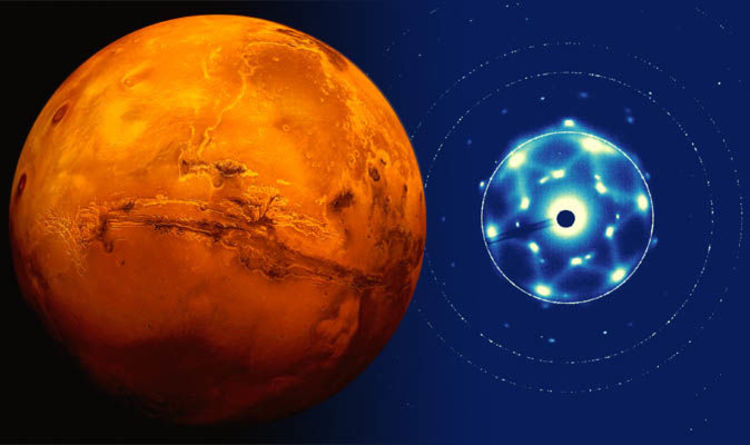 A team of researchers at the Diamond Light Source (DLS) synchrotron facility in the UK, a giant microscope harnessing the power of electrons to produce a blinding beam of light, have recreated the particular conditions of Mars right here on Earth.

In what is being touted as a ‘world first’, the DLS researchers have successfully produced Meridianiite – a mineral created when Mars’ seas and oceans froze over.

Following a year long study, the scientists behind the experiment have now revealed their startling findings to Express.co.uk in a world exclusive interview.

These ancient minerals which formed millennia ago on the surface of the planet could be the culprit behind the periodic liquid flows witnessed recently on Mars.

According to the researchers, the presence of Meridianiite is an indicator of the conditions on Mars back when it still had oceans.

Stephen Thompson, senior beamline scientist, exclusively told Express.co.uk: “The mineral we’re looking specifically at is Meridianiite, which is named after the place it was discovered on Mars. It is extremely rare on Earth.

“It is a form of magnesium sulphate which contains 11 molecules of water in its structure.

“The interesting thing about them is they only form in liquid and in freezing conditions whereas other sulphates form in evaporative conditions.

Water on Mars: Scientists have recreated the mineral Meridianiite which is abundant on Mars

“So this can tell us a lot about what happened on Mars in the past back when it had oceans.”

Finding and studying Meridianiite on Earth would be almost impossible because of how rare the mineral is on our planet.

In fact, there are only a few places where the conditions are just right, Mr Thompson said.

In 2007, deposits of Meridianiite were found on the surface of a pond in Central British Columbia, Canada, prompting scientists to look for the mineral on Mars.

Unfortunately the conditions needed for Meridianiite to remain stable are tricky – the mineral remains stable around 2ºC and starts to melt above 2ºC. 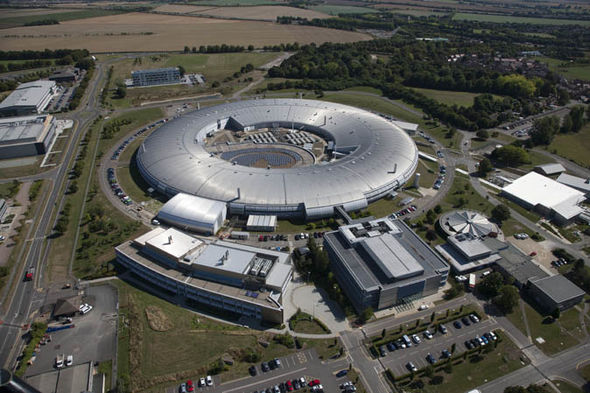 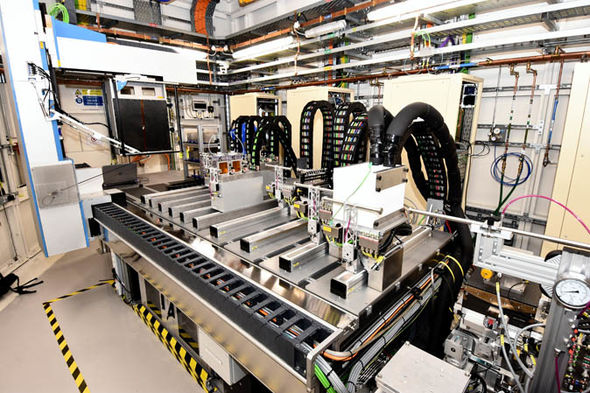 In low humid conditions, which can be found around Mars’ equatorial regions, Meridianiite turns into a fine dust which is then scattered with the wind.

Temperatures on Mars are much harsher than on Earth and Mr Thompson underlined that pure water is unstable on the planet’s surface.

Scientist studying the Red Planet from NASA’s Mars Reconnaissance Orbiter announced in January 2018 they have found evidence of vast ice waters locked away underneath Mars’ surface.

However it is unclear just how pure the ice water is.

But all of these exciting developments have made it easier for scientists to understand the makeup of the planet before its surface waters dried up or vanished – even hinting at a lush planet which could sustain life at one point. 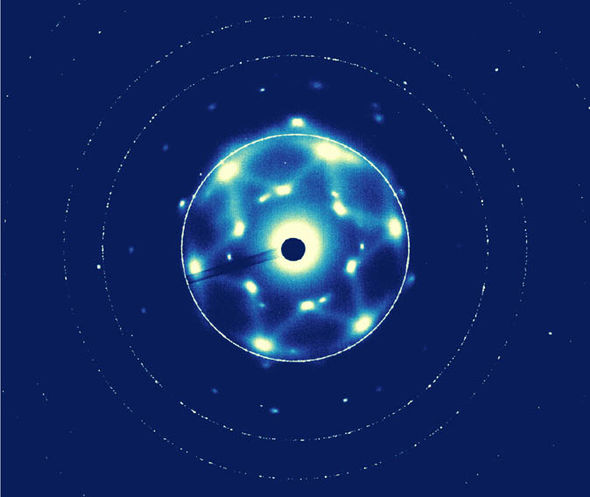 Results image from the Long Duration Experiment, depicting the formation of Meridianiite crystals

Mr Thompson said: “I would not take this as an indicator that there was life on Mars, but what it is it provides a possibility of a habitat and the conditions in which organisms could potentially exist.”


The entire process took the researchers a year of meticulous temperature control to achieve the results.

Meridianiite forms from a freezing solution rich in dissolved magnesium sulphate, but the main problem was extracting and preserving the mineral at its melting point of 1.8ºC.

In order to maintain the right conditions, the researchers created a bespoke ‘environment chamber’ at the synchrotron, the Long Duration Experiment (LDE) facility, which held five separate ocean samples each cooled and controlled by computers.

The Diamond synchrotron accelerates electrons around a coil at near to light speeds, creating a beam of light 10 billion times brighter than the sun. The beam is then channeled into 31 laboratories known as ‘beamlines’.

The LDE then used a newly designed cold cell apparatus which could transmit X-ray beams and through which an anti-freeze was circulated for temperature control.

Meridianiite began to form in the LDE relatively quickly and was present by the fourth week of the experiment, hinting why we no longer see water on the surface of Mars.

Researchers claim the study is crucial because present models of cold aqueous environments rely on data extrapolated from experiments at higher temperatures.

And the study did not have the luxury of avoiding challenges which threatened the whole endeavour. 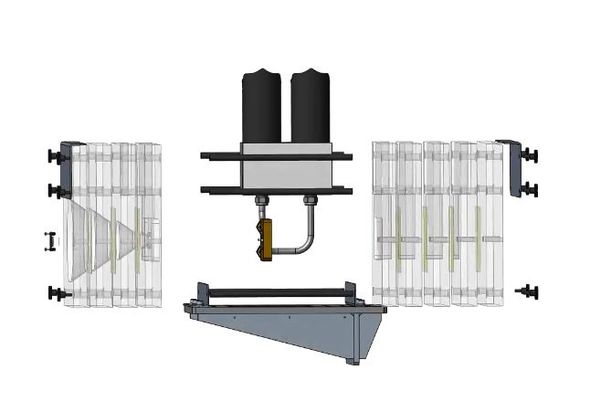 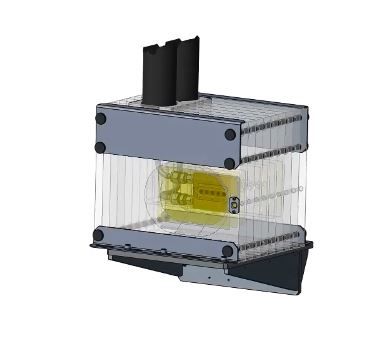 Meridianiite formation: The Cold Cell was used to maintain the right temperature to form the mineral

One of the biggest issues was preventing power cuts which could have plunged the project towards failure.

Dr Kelly said: “Running over a year you have to have power backups for computers.

“Scientist would usually arrive for 12 hour periods to carry out their experiments, whereas the Long Duration facility was mounted on separate robotic stages – an automated sequence for the possibility of 20 robotic experiments to be picked up and put in the beam.”

Mr Thompson added: “The thing about Diamond is that there is an awful lot of science going on. It’s a mind boggling array of things.”

The researchers believe the findings of their study have many far more reaching applications, not just among the stars but here on Earth as well. 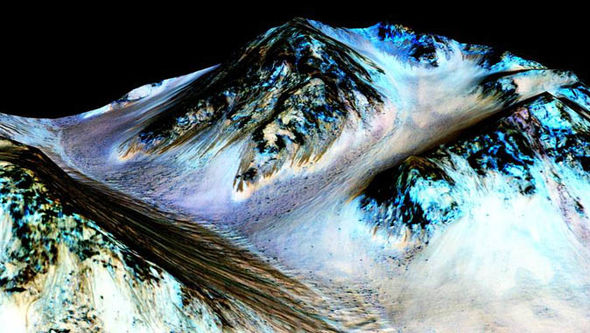 Water on Mars: NASA has observed evince of liquid on the surface of Mars

Mr Thompson in particular believes it has “a massive impact on our understanding of climate change”, the melting of the polar ice caps and effects of solar radiation.

Studying the presence of minerals such as Meridianiite in ice caps can help further the understanding of how reflective ice is and how the sun plays into climate change.

Elsewhere there are currently eight bodies in the solar system, other than Earth and Mars, where there is strong evidence to suggest the presence of water below liquid ice crusts.

These include the satellite moons of Jupiter such as Europa and those of Saturn and Pluto.

Alongside their study of Mars, the researchers are also looking at the composition of a subterranean ocean on Europa, where the formation of Meridianiite has been observed.