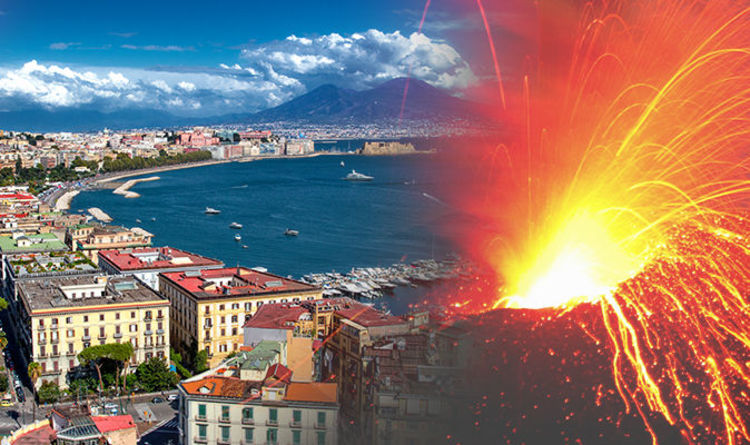 
Research shows that a bubbling mass of magma “like a boiling pot of soup” is building beneath the Campi Flegrei volcano, western Naples – after decades of inactivity.

The 24 crater, 90 square mile supervolcano is more “dangerous” than before.

The last major eruption at the site was in 1538, after which magma exploded into the sky for several days.

Scientists believe a stream of liquid magma that is just a few miles from Mount Vesuvius has been bubbling at Campi Flegrei since the 1980s.

Hot fluids that are moving west towards Naples are the most likely trigger of an eruption.

“You can now characterise Campi Flegrei as being like a boiling pot of soup beneath the surface.”

Dr De Siena’s team of researchers were the first to prove that there was magma developing beneath the surface at Campi Flegrei.

Christopher Kilburn, a volcanologist at University College London, said an eruption is not imminent – but that Naples authorities should remain ready for anything.

He suggested an eruption on the scale of the Mount Vesuvius catastrophe in 79 AD could happen.

Camp Flegrei’s fallout zone stretches for thousands of miles and could impact hundreds of thousands of people.

Vesuvius Observatory scientists have been closely monitoring the situation in case an eruption might be imminent.

Naples native and former US military contractor, Giovanna Varallo Grimes, said: “The reality is that living on top of the most dangerous caldera in the world can be worrisome if you are so inclined.

“Like any natural catastrophe there is only so much you can do, and worrying about it will shorten your life and certainly won’t change the outcome.”

Volcanologist Stefan Carlino, from the National Institute of Geophysics and Volcanology, said it is “not possible” to predict when the next eruption will be.

Mr Carlino has attempted to predict the next eruption – and an uplift, where molten magma rises to the surface, has been bubbling for decades.

But all that Mr Carlino can say with confidence is that this “could represent a long term preparation to an eruption.”

Planting More Trees in Cities Would Save Thousands of Lives, Scientists Say : ScienceAlert
New Prototype Device Generates Hydrogen From Untreated Seawater : ScienceAlert
How a Dead Girl in Paris Wound Up With The Most-Kissed Lips in All of History : ScienceAlert
Human Brain Organoids Transplanted Into Rats Just Passed a Major Milestone : ScienceAlert
Orcas Are Contaminated With a Forever Chemical Associated With an Unlikely Product : ScienceAlert