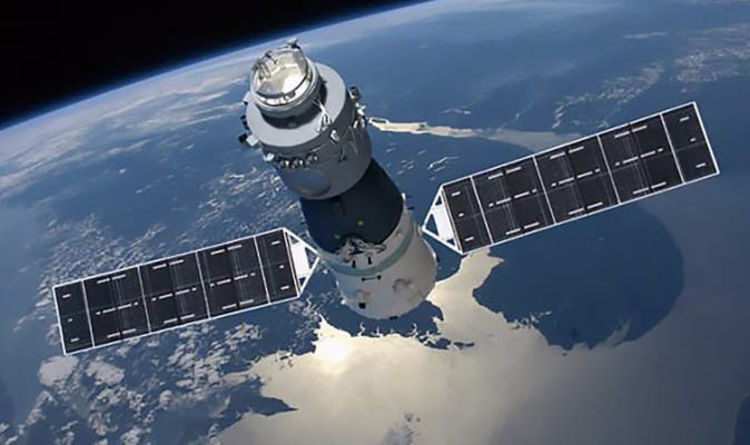 Tiangong-1 has been orbiting Earth since 2011, however, it ceased functioning in March 2016 and therefore will fall to Earth uncontrolled.

The 9.4 ton spacecraft will fall from the sky around April 1 and break up in the Earth’s atmosphere.

However some debris is expected to survive and reach the ground intact, although experts warn it is nearly impossible to predict where it will land.

Jesse Gossner, an engineer at the US Air Force’s Advanced Space Operations School said: “Even if you knew exactly where it hits in the atmosphere, the debris and stuff can spread out to a pretty big area.

“It’s really just a guessing game..there’s just no way to tell where it’s going to land.”

Why is Tiangong-1 falling from space?

The spacecraft was launched by China’s National Space Administration (CNSA) in 2011 and it was designed to remain in space for two years.

The Shenzhou-10 visit in June 2013 marked the end of the space’s lab operational life and shortly after the visit it was put into “sleep mode”.

Chinese officials had said they planned to de-orbit Tiangong-1 and using the craft’s thrusters guide it into Earth’s atmosphere.

However in March 2016, China announced the space station had “ceased functioning” and it had stopped sending data back to its handlers.

Therefore the spacecraft could not be guided back to Earth and instead it would be pulled down by atmospheric drag.

Tiangong-1 – which weighs 9.4 ton – will not be the biggest spacecraft to ever fall uncontrolled from the sky.

In July 1979, NASA’s 85-ton Skylab space station burned up over the Indian Ocean and Western Australia and in February 1991 the Soviet Union’s 22-ton Salyut 7 orbital outpost fell to Earth while it was connected to another 22-ton spacecraft called Cosmos 1686. 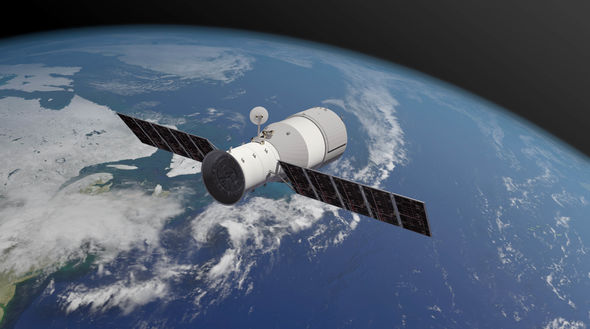 Chinese Space Station falling: The spacecraft will fall to Earth around Easter

Where will it fall to Earth?

Scientists have said it is difficult to predict where the space station will fall exactly to Earth.

Based on its orbital details, it will happen somewhere between 43 degrees north latitude and 43 degrees south – which stretches from the South Dakota-Nebraska border all the way down to Tasmania.

It is most likely for debris from the spacecraft to fall within the extreme edges of the 43 degree bands, so the US, southern Europe and the Balkans are the most densely populated areas which could be hit.

However space experts have said the potential danger to humans is minimal – the odds of debris from the vessel hitting a human are estimated to be less than one in 1 trillion.

There is a one-in-1.4 million chance of a person in the US being struck by lightning. 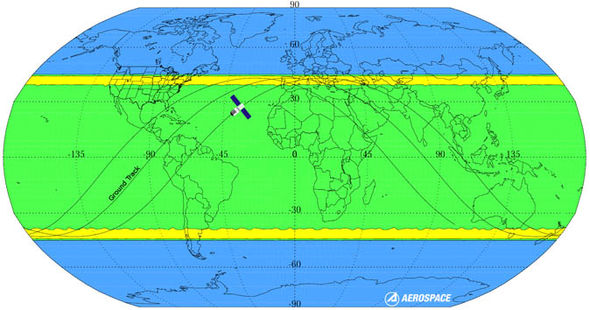 Zhu Zongpeng, the chief designer of the space lab, has been monitoring the Tiangong-1 and he predicted most of it would burn u when it entered the atmosphere, while the rest would fall into the sea.

The European Space Agency said: “Given the uncontrolled nature of this re-entry event, the zone over which fragments might fall stretches over a curve ellipsoid that is thousands of kilometres in length and tens of kilometres wide.

“While a wide area could be affected, it is important to point out that  large part of the Earth is covered by water or is inhabited.

“Hence the personal probability of being hit by a piece of debris from the Tiangong-1 is actually 10 million times smaller than the yearly chance of being hit by lightning.

“In the history of spaceflight, no casualties due to falling space debris has ever been confirmed.”