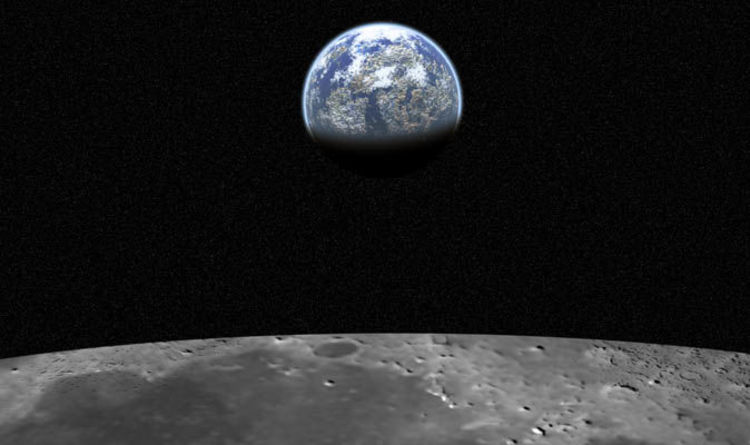 
The mini-moon study published in Frontiers in Astronomy and Space Science found asteroids from deep in the solar system have a tendency to get caught in Earth’s gravity pull.

If proven accurate, the mini-moon report could forever change how we look at the moonlit skies.

These barrelling space rocks are typically flung out towards our home planet from the asteroid belt between Mars and Jupiter.

The mini-moons are small, extremely fast and to date only one such asteroid has ever been confirmed.

Dr Robert Jedicke, University of Hawaii at Manoa, said the soon-to-go-live Large Synoptic Survey Telescope (LSST) will once and for all prove the existence of these mysterious objects.

“These asteroids are delivered towards Earth from the main asteroid belt between Mars and Jupiter via gravitational interactions with the Sun and planets in our solar system.

“The challenge lies in finding these small objects, despite their close proximity.”

But can these mini-moon objects truly be considered to be on par with our well known and beloved Moon?

At a glance, the immediate differences between the two heavenly bodies immediately strikes out any such idea.

First of all, these orbital companions to Earth are much too small to even remotely resemble the Moon – they are typically only a few metres long.

Mini-moons will typically just fly-by the planet or get caught in the Earth-Moon system for a short amount of time.

Occasionally they might complete an orbit around the Earth only to shoot back out into space or burn up in atmosphere.

Dr Jedicke explained: “Mini-moons are small, moving across the sky much faster than most asteroid surveys can detect.

“Only one mini-moon has ever been discovered orbiting Earth, the relatively large object designated 2006 RH120, of a few meters in diameter.”

But there is another source of hot debate and potential candidate for the title of Earth’s second Moon – the stellar object known as Cruithne.

This peculiar Q-type asteroid is often called a companion moon to Earth due to its unusual horseshoe orbit which seems to be tied to the Earth’s journey around the Sun.

Officially known as Asteroid 2003 YN107, Cruithne follows a peculiar path where it pauses and corkscrews near the Earth for years at a time before moving along.

These asteroids are sometimes known as Earth Coorbital Asteroids, or simply coorbitals, but NASA’s experts think this is still not enough to label them full-blown moons.

Paul Chodas, of NASA’s Near Earth Object Program, said: “These asteroids are not truly captured by Earth’s gravity. But from our point of view, it looks like we have a new moon.”

The astronomer said the asteroid and such similar objects are simply to “eccentric” to be considered anything but asteroids.

Behold, The Epic Last Images Taken by NASA’s Asteroid Redirection Test Spacecraft : ScienceAlert
Biology Inspires a New Kind of Water-Based Circuit That Could Transform Computing : ScienceAlert
Shimmering ‘Lakes’ Under The South Pole of Mars Might Be Something Else Entirely : ScienceAlert
Hubble And Webb Pics Reveal DART Impact Was Even Bigger Than Expected : ScienceAlert
Experts Estimate The Scale of The Nord Stream Pipelines Methane Leak : ScienceAlert