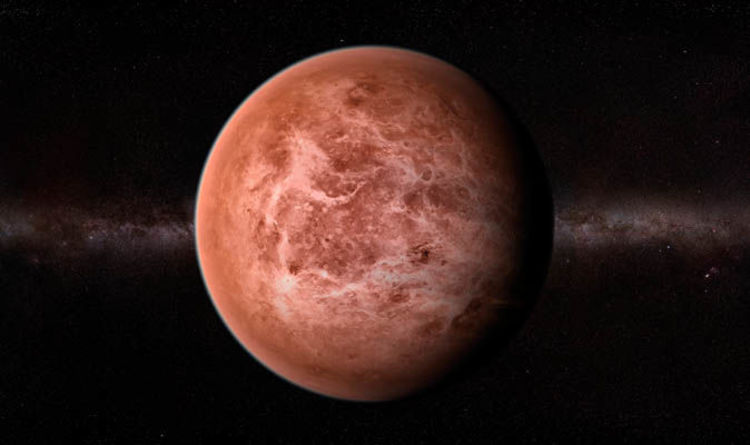 
Planet Venus appears nears its so-called greatest eastern elongation when it is visible in the skies just after sunset.

This month the second planet from the Sun reaches the point on night of Friday, August 17.

Typically, Venus’ orbit takes the planet much closer to the Sun than the Earth and it is hard to spot.

But for a few weeks each year the planet reaches its greatest elongation when it is most separate from the Sun.

This makes Venus much easier to spot at night, particularly in the Southern Hemisphere.

According to astronomer Dominic Ford, editor of In-The-Sky.org, the planet will be extremely bright in the coming days and will be the third brightest object in the sky by the end of September.

As a result, Venus is often referred to as the morning or evening star.

How to see Venus at night this week?

The Earth’s neighbour reaches its point of greatest elongation in the east tonight around 9pm UK time.

Unfortunately, when observed from the UK, the moment of elongation will not be visible.

Mr Ford wrote: “In the southern hemisphere Venus will be well placed for observation in the evening sky, shining brightly at magnitude -4.3.

“From London however, it will not be observable – it will reach its highest point in the sky during daytime and will be no higher than six degrees above the horizon at dusk.”

Venus’ elongations alternatively take place in the evening and the mornings, depending on where the planet sits in the sky – to the east or west of the Sun.

When the planet lies to the east of the Sun it rises and sets shortly after the star and should be visible in the early evening.

However when it lies to the west of the Sun, the opposite is true, and the planet rises and sets before the Sun and is visible just before sunrise.

This month the planet can be found about 45 degrees to the east of the Sun.

Mr Ford explained: “At each apparition, Venus reaches a similar separation from the Sun – around 48 degrees.

“This distance is set by the geometry of how big Venus’s orbit is, and how far away it is from the Earth.

“Nonetheless, some times of the year are more favourable for viewing Venus than others.”

These more favourable times appear to be in the evening hours during a spring equinox and the morning hours near the autumn equinox.

Only two planets visible in Earth’s sky are capable of reaching elongation. These are Venus and Mercury due to being much closer to the Sun.

Venus will reach peak brightness on Saturday, September 25 and will move towards an inferior solar conjunction by the end of October.

3 Major Aquatic Animal Groups Can Trace Their Lineage to This Ancient Armored ‘Worm’ : ScienceAlert
Control of a 6-Qubit Processor in Silicon : ScienceAlert
It Turns Out There Is Such a Thing as Good Gossip, According to New Research : ScienceAlert
We Just Got Our Closest View of Europa in 20 Years, And We Can’t Stop Staring : ScienceAlert
We May Finally Know Why Oceans in The Southern Hemisphere Are Getting So Warm : ScienceAlert