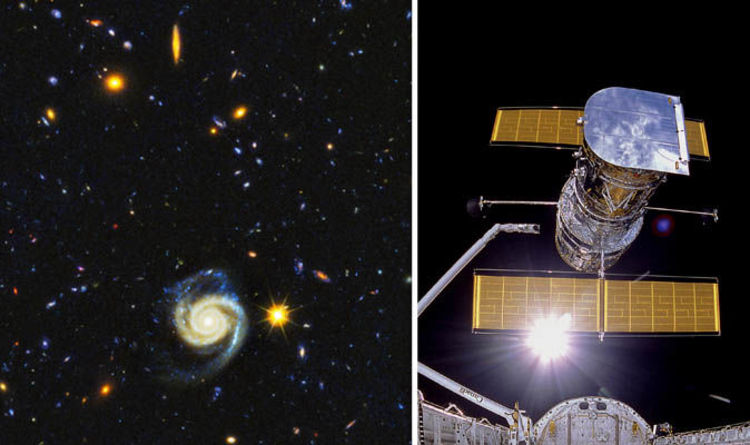 
At least 12,000 of these bright star clusters dotting the astounding expanse of space were photographed in the early days of their existence.

The Hubble space picture shows the evolving nature of space and puts into perspective just how tiny the Earth is against the rest of the cosmos.

This particular picture of space is a portion of the GOODS-North field in the northern constellation of Ursa Major.

NASA touted this snapshot of the universe as one of the largest panoramic views ever captured through a novel combination of ultraviolet, infrared and visible-light imaging.

Contained within this colourful clusters of pixels are stars which were born more than three billion years after the Big Bang.

Astronomers behind the Hubble’s ultraviolet vision tools have traced the birth of these stars back more than 11 billion years into the past.

The US space agency said: “Astronomers have just assembled one of the most comprehensive portraits of the universe’s evolutionary history based on a broad spectrum of observations by the Hubble Space Telescope and other space and ground-based telescopes.

“In particular, Hubble’s ultraviolet vision opens a new window on the evolving, tracking the birth of stars over the last 11 billion years back to the cosmos; busiest star boring period, about 3 billion years after the Big Bang.

“This photo encompasses approximately 15,000 galaxies – 12,000 of which are star forming – widely distributed in time space.”

Because the Earth’s atmosphere filters out most of the ultraviolet radiation hitting the planet, the Hubble Space Telescope is much better positioned to observe the star.

Since its launch on April 24, 1990, the telescope has provided NASA with more than 1.3 million observations of the universe.

For its latest snapshot of the cosmos, the Hubble telescope looked at the gaps between distant galaxies on the infrared and ultraviolet spectrums.

Light emanating from distant galaxies initially burst out as ultraviolet light but the increasing expansion rate of the universe has shifted the light into infrared wavelengths.

NASA circumvented this problem by comparing images of distant and nearby star formations to better understand how small clusters of hot, young stars grew into giant galaxies.

The result is “one of the most comprehensive portraits yet” of the incredible history of the universe, according to NASA.

The Hubble Space Telescope is part of an international collaboration between the US space agency and the European Space Agency (ESA).

The incredible instrument is managed by scientists based at NASA’s Goddard Space Flight Center in Greenbelt, Maryland.

All scientific operations conducted by Hubble are carried out by the Space Telescope Science Institute (STScI) in Baltimore, Maryland.

Thanks to Hubble’s observations, astronomers using the telescope’s data have published more than 15,000 scientific papers to date, making it one of the most productive scientific instruments ever created.

Bitcoin’s Climate Impact Is Bigger Than Beef Farming – And It’s Only Getting Worse : ScienceAlert
Biology Inspires a New Kind of Water-Based Circuit That Could Transform Computing : ScienceAlert
Astronomers Think They Know The Reason For Uranus’s Kooky Off-Kilter Axis : ScienceAlert
Weight Lifting in Old Age Does More Than Just Keep Your Muscles Strong : ScienceAlert
Shimmering ‘Lakes’ Under The South Pole of Mars Might Be Something Else Entirely : ScienceAlert