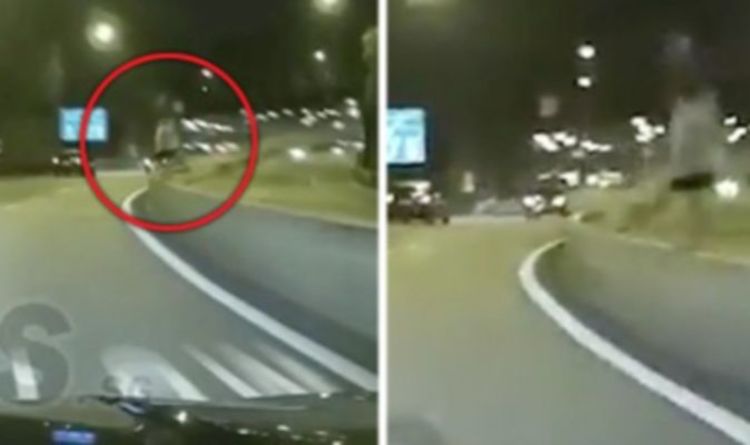 
The video is then slowed down in a bid to reveal what the driver may have spotted.

It has been suggested it shows a ghostly apparition of a man wearing pale trousers and a dark top as he floats about 2ft above the ground.

The video was captured as the driver was on Upper Bukit Timah Road in central Singapore at night, Dailystar.co.uk reports.

There has been online speculation it could be the ghost of a hitchhiker or road crash victim.

However, sceptics said it could just be someone climbing over the central barrier of the motorway, who was caught out of focus by the camera, appearing blurred.

There were no reports of accidents or disturbances in the area that night.

The southeast Asian country is well-known for ghost stories.

Locals told tales including one about a taxi driver whose female passenger asked to be taken to the cemetery.

When he arrived and turned around to ask for his fare, he reportedly saw only a stone tablet in his rear seat.

And another cabbie told a story of taking an old man to the cemetery, who advised him to take the road on the right to exit, as the one on the left was “not meant for humans”.

And this is not the first spooky story we have seen this week.

Yesterday video footage emerged of the moment a motion camera caught something bizarre during the middle of the night.

And before that, a woman uploaded terrifying CCTV footage from her family home appearing to show an entity.

There have been a series of alleged ghost activity videos to hit the internet this month.