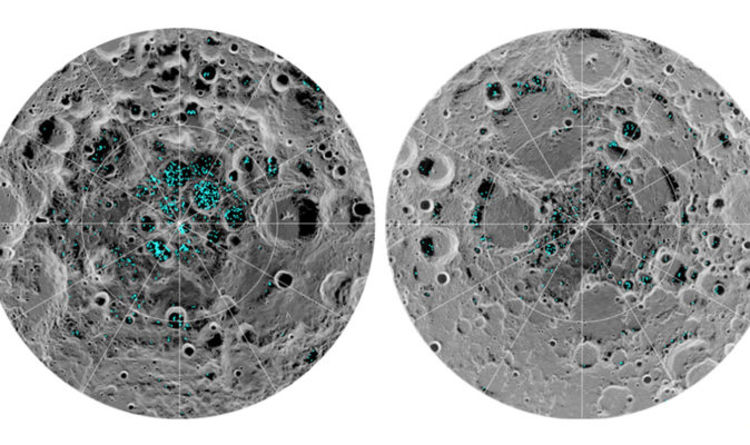 
The space agency recently confirmed an abundance of water on the Moon situated in hundreds of patches of ice deposited in the north and south poles.

Not only does the discovery mean there could be lifetimes’ worth of drinking water already on the Moon but it could help with producing more rocket fuel and oxygen to breathe.

If the discovery can be used for fuel, then NASA could use the Moon as a pit stop on their way into deep space.

President Trump said last year he wants the Moon to act as “a foundation for an eventual mission to Mars.”

But NASA Administrator Jim Bridenstine says the presence of water has renewed hopes of “sustainable” human exploration of the Moon itself.

The hope is to use the water for rocket fuel so NASA can send rockets and other space vehicles that could be used again and again.

Mr Brindensitine said: “We want tugs that go from Earth orbit to lunar orbit to be reusable.

“We know that there’s hundreds of billions of tons of water ice on the surface of the Moon.”

However, NASA lunar scientist Sarah Noble disputed this and told the news agency that experts are still unsure exactly how much water there is on the Moon and there is a lot which remains to be learned.

She said: “We have lots of models that give us different answers. We can’t know how much water there is.”

Dr Noble says that the next step is to send robotic rovers or landers to the lunar satellite to discover the exact amount of water.

With NASA wanting in on a moon habitat, the lunar surface could become very populated in the years to come.

A Stunning New 3D Model of The Cat’s Eye Nebula May Help Us Solve Its Mysteries : ScienceAlert
Scientists Don’t Know What to Do With This Weird ‘Blue Goo’ Ocean Organism : ScienceAlert
Termites Love Global Warming So Much That They May Make It Worse, Says Study : ScienceAlert
The Real Reason For Using Flight Mode Is Not What You Think : ScienceAlert
Experiment Reveals What 1 Hour in Nature Does to The Human Brain : ScienceAlert