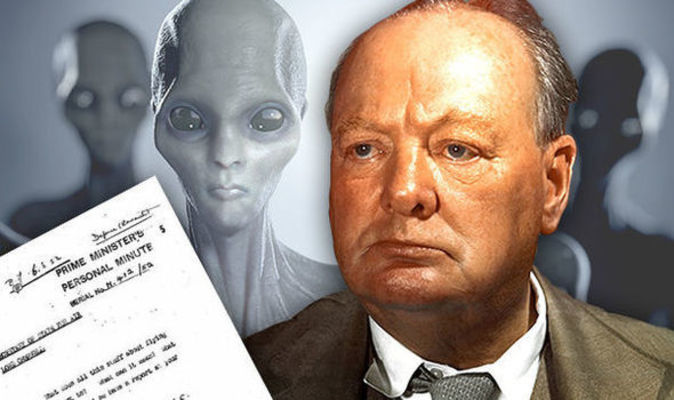 
Declassified documents have revealed the wartime leader built a special Whitehall team, known as the Flying Saucer Working Party, to look into a strange increase in UFO sightings.

An official report said the numerous sightings had earthly explanations, including the cause of strange objects over US capital Washington DC which were picked up by several military radar.

But, conspiracy theorists claim the report involved the cover up of a sighting in the UK by RAF staff.

The theory is fueled by an alleged deathbed confession by Churchill’s personal bodyguard who spoke of these bizarre events which involved two RAF pilots reporting encounters with mysterious aircraft, known as “foo fighters”, as WWII drew to an end.

Foo fighters was the term used by Allied aircraft pilots in World War II to describe UFOs and mysterious aerial phenomena such as balls of fire that followed fighter aircraft during battles in the skies over Europe and the Pacific.

Military chiefs assumed the foo fighters were really secret German weapons sightings, but they are said to have continued after the end of the war and even into modern times, causing many to dispute this.

So what triggered Churchill’s involvement?

In July 1952, US Air Force fighter jets had to be scrambled on two consecutive weekends after radar detected several unidentified objects flying in a restricted zone over the White House – causing public panic.

Although in the US, Churchill wanted to know more and about any implications for the UK.

On July 28, 1952, Churchill sent his Secretary of State for Air, Lord Cherwell, a memo, requesting investigations into what happened in the US and the wider issue.

The note, now called the “Churchill Memorandum,” the then PM wrote: “What does all this stuff about flying saucers amount to?

“What can it mean? What is the truth?

“Let me have a report at your convenience.”

The top secret group had actually been set up two years earlier to look into home grown UFO sightings.

It was unable to completely rule out “an aircraft of extraterrestrial origin, developed by beings unknown to us on lines more advanced than anything we have thought of”.

However, it explained it was more likely the sightings were down to normal aircraft, balloons, birds or other natural phenomena, optical illusions, deliberate hoaxes – or “psychological delusions”.

But years later, in 1999, Churchill’s involvement in the great UFO debate resurfaced.

The grandson of a retired RAF officer wrote to the MoD, inquiring about an incident in which Churchill allegedly banned the reporting of a UFO encounter off the east coast of England.

The RAF officer – who was said to be Churchill’s personal bodyguard – had allegedly confessed on his deathbed that an RAF reconnaissance plane was returning from a mission over occupied Europe when it was shadowed by a “metallic UFO” off Cumbria.

It was claimed the crew took pictures of the object – which was said to “hover noiselessly” by the plane.

At the time, when the mysterious encounter was brought to Churchill’s attention, he ordered that details remain classified for at least 50 years – and could only be released EVER following a review by a future PM.

Churchill was allegedly terrified that news of the possibility of aliens could destroy faith in God and cause unrest and mass panic.

The British bulldog is alleged to have shouted: “This should be immediately classified since it would create mass panic among the general population and destroy one’s belief in the church.”

Conspiracy theorists claim the establishment must have since hidden or destroyed all records of the incident.

There is no record of the event, or Churchill’s orders, and the MoD says all UFO files from before 1967 have been destroyed.

Jason Chapman, who has written several books on the Churchill Memorandum, said: “The MoD has demonstrated in the past that it is capable of covering up a great many incidents.

“I believe it is possible that a former high ranking military official would have knowledge of UFOs.”

The 46-year-old, who works for British defence contractor BAE Systems, said: “Someone, somewhere knows something.

“It’s definitely not our world leaders – such information is way above the pay grade of the Prime Minister.

“Perhaps sat at the back of the House of Lords there’s a retired general, a relic left over from the Cold War, who has information which could prove there’s a cover-up.”

The Moon Stole Something From Deep Inside Earth Eons Ago, and Scientists Can Prove It : ScienceAlert
Researchers in South America Discover a New Species of Tiny but Tough Dinosaurs : ScienceAlert
Robot Shows It’s Possible to Swim Through The Emptiness of a Curved Universe : ScienceAlert
Deep-Sea Sponges Can ‘sneeze’ Out Mucus, and The Footage Is Weirdly Mesmerizing : ScienceAlert
This Artificial Synapse Can Run a Million Times Faster Than Ones in The Human Brain : ScienceAlert