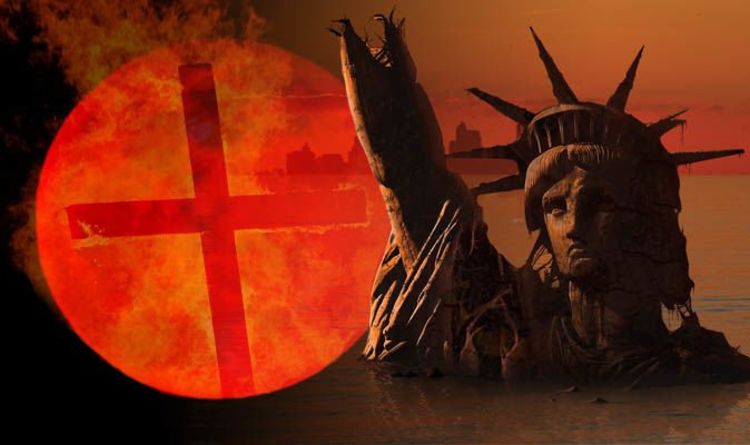 The Blood Moon prophecy claims the world’s fiery demise will be preceded by a menacing omen in the skies. Doom-mongers and online conspiracists believe the upcoming January 21 Super Blood Moon is such an omen. On the night of the Blood Moon, the glowing disc of the lunar orb will take on a deep red, almost blood-like, hue. Pastor Paul Begley, an evangelical preacher from Indiana, US, is one of the many doomsday prophets who believe the Blood Moon is a warning of the apocalypse.

In his opinion, the “heavens are already shaking” and the “coming of the Lord” is fast approaching.

And though pastor Begley refrained this week from confirming the world will indeed perish in hellfire on January 22, he suggested this is a possible outcome of the Blood Moon.

Speaking to an online audience during one of his impassioned sermons, the firebrand preacher warned a cataclysm is headed towards the Earth.

He said: “Obviously these apocalyptic signs in the heavens are pointing to a catastrophic event on the horizon.

“We don’t know when. Just because you’re ogling to have a Super Blood Moon on January 20 and January 21 doesn’t mean on January 22 all hell’s going to break loose.

End of the world: Some conspiracists fear the Blood Moon prophecy will come to pass next month (Image: GETTY)

Blood Moon 2019: Pastor Begley said the world might or might not end on January 22 (Image: PAUL BEGLEY)

“And then again it doesn’t mean it won’t, ok? So there are these signs that are starting to be revealed.

The preacher said things are already getting “bad” and “difficult” and are only bound to get worse before the end arrives.

But he also said true believers have nothing to fear from the apocalypse because they have been forewarned by the Bible.

The souls of believers will be pulled off the Earth before the final destruction ensues.

Pastor Begley said: “Boy, we’re not going to be here for the wrath of God.”

According to the Blood Moon prophecy, the apocalyptic lunar sign was foretold by the Book of Revelation, Book of Acts and Book of Joel.

The Book of Revelation 6:12 reads: “I watched as he opened the sixth seal. There was a great earthquake.

“The sun turned black like sackcloth made of goat hair and the whole moon turned blood red.”

And the Book of Acts and Book of Joel both mention the Moon turning to blood before the “great and terrible day of the Lord”.

Pastor Begley believes these passages in holy scripture paired with the Blood Moon, recent earthquakes, solar winds and the current state of world politics are all evidence of impending doom.

READ MORE: Will the FULL lunar eclipse in January signal END OF THE WORLD?

But this is not the first time Pastor Begley has warned of the world ending and the prophecy itself flares up on the internet every few months.

into happens because Blood Moons are a perfectly natural phenomenon which occur once or twice a year during a total lunar eclipse.

During the last Blood Moon on July 27, 2018, Pastor Begley preached the “Devil’s back is breaking” and prophecy is being fulfilled.

Before that, the Blood Moon prophecy was popularised online as early as 2014 when conspiracists claimed to have found a prophetic connection between four lunar eclipses between April 2014 and September 2015.

End of the world: The Christian pastor is a firm believer in the end times and the apocalypse (Image: PAUL BEGLEY)

A Blood Moon is the result of natural processes, caused by scattered sunlight filtering out bands of blue light in Earth’s dusty atmosphere.

The effect is known as Rayleigh Scattering and is responsible for the orange colour of sunsets and the blue colour of the skies.

Space agency NASA explained: “As the Moon passes into the central part of the Earth’s shadow, called the umbra, it darkens dramatically.

“Once it’s entirely within the umbra the Moon appears a dim red due to sunlight scattered through the Earth’s atmosphere.

“In fact, if you watched the lunar eclipse from the surface of the Moon, you would see the Sun set behind the entire Earth, bathing you in a warm red glow.”

Astronomers Spot The Biggest Galaxy Ever, And The Scale Will Break Your Brain : ScienceAlert
Crocodiles Seem to Be Thriving in a Toxic River That’s More Like a Sewer. Here’s Why : ScienceAlert
Earth’s Oxygen Came From an Unexpectedly Deep And Hot Source, Study Suggests : ScienceAlert
Chilling Glimpse Into Our Future if We Survive Another Million Years : ScienceAlert
Forests at Risk of Burning an Extra 30 Days a Year Without Climate Action : ScienceAlert