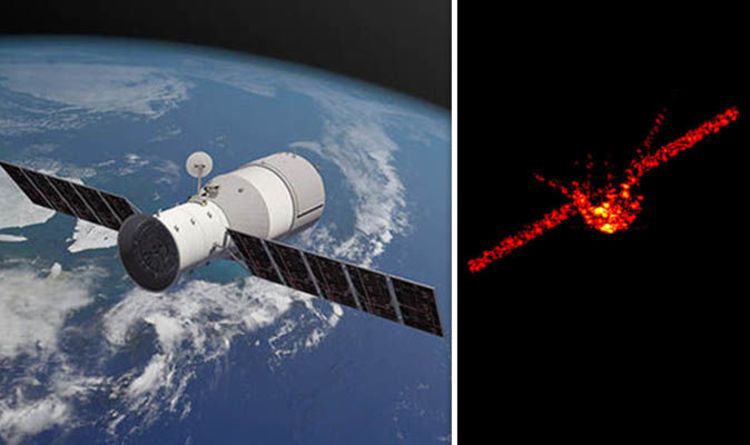 
The current re-entry estimation window of Tiangong-1 is Sunday, April 1 at 8.30pm GMT, plus or minus eight hours, according to the Aerospace Corporation.

The European Space Agency has the window centered at around 11.25pm GMT on April 1, but the variable window runs from the afternoon of April 1 to the early morning on April 2.

You can watch the Chinese space station online through a robotically controlled telescope at The Virtual Telescope Project.

The telescope started live coverage on Wednesday, March 28 at 12pm GMT and the webcast will feature live views of the space station in partnership with the Tenagra Observatories in Arizona as it plummets toward Earth.

“Next 28 March, the Virtual Telescope Project and Tenagra Observatories offer you the unique chance to see it during one of its very last passage across the skies.

“You can join us online, via the internet, from the comfort of your own home.

“The Virtual Telescope Project and Tenagra Observatories, on behalf of their partnership, offer you the opportunity to see the Tiangong 1 station during one of its final passes across the stars.”

The team managed to capture an exceptional image of the space station re-entering Earth’s atmosphere as the lab was at an altitude of around 220km on March 28 – about half the altitude of the International Space Station (ISS) – and travelling at a speed of around 28,000 km/hour.

The company has set up a dashboard – ‘Where is Tiangong-1 now?’ – which monitors the altitude, re-entry time and features a digital view of the space lab.

Tiangong-1’s current altitude is 176km and it has just passed the south-west coast of Australia – the space station completes an orbit of Earth every 90 minutes.

The lab can also be tracked on N2yo.com, a satellite-tracking site established in 2006. which offers real-time live tracking of satellites.

The lab’s maps help people zero in on Tiangong-1’s location as it makes its uncontrolled descend towards the planet.

The site offers real-time tracking of the spacecraft’s orbiting period, a map of the lab’s location, such as the countries and oceans it is flying above and its orbiting speeds.

Tiangong-1 is the first Chinese space station, having launched in 2011, and has already hosted two crews of Chinese astronauts in 2012 and 2013.

It remained operational until 2016, when contact with the station was lost and the lab is now falling towards Earth and is expected to burn up in the atmosphere, but some debris may make it through the atmosphere and reach the ground or water.

However, the risk of getting hit by the spacecraft is about 1 in 292 trillion, Aerospace Corp said.

There’s a ‘Lost City’ Deep in The Ocean, And It’s Unlike Anything We’ve Ever Seen : ScienceAlert
Mysterious ‘Zone of Uncertainty’ Inside The Brain Reveals a Surprise : ScienceAlert
JWST Has Found Life’s Elemental Building Blocks in The Depths of Darkest Space : ScienceAlert
One Simple Idea Makes It Much Easier to Manage Your Weight Over Time : ScienceAlert
Study of 500,000 Medical Records Links Viruses to Alzheimer’s Again And Again : ScienceAlert