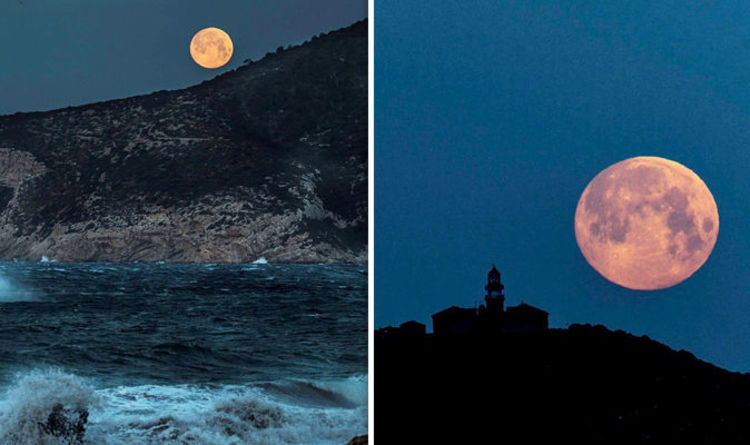 
The first full moon of spring is always dubbed the Paschal Moon and the Sunday following its emergence is always called Easter Sunday.

The combination of both a Blue and Paschal Moon is incredibly rare and has not been seen since 1999.

Back then the second full moon in March was on a Wednesday, meaning that Easter Sunday was on April 4.

The last time a Blue Paschal Moon sat in the sky on March 31 was back in 1714 – however this was only the case for those in Europe and on the Eastern Hemisphere.

The US last saw such an event back in 1646 where a Blue Paschal Moon emerged on Saturday, March 31, and was followed by Easter Sunday.

Such a merge of moons is so infrequent that another Blue Paschal Moon will not occur again until 2037.

The moon is set to appear at its fullest at 1.37am GMT tonight.

Two full moons take roughly 2.66 years to appear in the same month – the reason for such as celestial event is down to one particular anomaly.

The time it takes to transition from one full moon to the next is 29.53 days, this usually means that one occurs every month.

However this year February did not have a full moon because the month was shorter.

Because February missed out on a full moon, March will have two full moons.

A moon is dubbed a Blue Moon if it is the second full moon to rise within one calendar month – this means that we have been graced with two Blue Moons this year.

Blue Moons usually occur once every 2.7 years – the rarity of such an event is one of the reasons the saying “once in a blue moon” was created.

The Blue Moon tonight will be the last until 2020.

Although gazers should be able to witness the celestial event easily in clear conditions, the best viewing experience will come from the use of a telescope.

The Blue Moon is expected to rise at 8pm this evening.